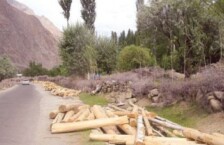 GILGIT: The illegal felling of trees in the Gilgit-Baltistan (G-B) region continues unabated, causing irreplaceable and devastating damage to the ecosystem of the area.

According to latest reports from Khan Muhammad Qureshi, a local activist in Chilas, some illegal felling has been reported in Diamer valley.

About 200 trees in the Babusar top area have been felled this month. “Unfortunately a strong group of illegal loggers is behind this onslaught,” Qureshi said on Wednesday. “This isn’t the first time 200 trees have been cut, they have done it in the past as well,” Qureshi told The Express Tribune on Wednesday.

According to available statistics, approximately 295,000 from 640,000 hectares of forest has been denuded in the last 20 years due to callous cutting of trees and illegal transportation down-country.

The current onslaught has further shrunk the forest cover – causing deeply impacting the ecosystem which is resulting in climate change that has caused widespread rains and landslides in the region over the years.

“This year trees in other valleys have also been cut by the loggers and we brought this to notice of public representatives,” said Qureshi.

The deforestation of woodland in Diamer also echoed in the G-B assembly this week, where opposition leader Shah Baig accused successive governments of tampering with official timber figures for a decade to benefit the loggers. “Timber in Diamer actually totals 14,000 feet, but it is being shown as 40,000 feet to benefit the loggers,” Baig said in the assembly on Tuesday. On this, Forests Minister Imran Wakil assured the house that action would be taken against the responsible officials if lawmakers can support such allegations with evidence.

G-B government spokesman Faizullah Faraq confirmed fresh felling had been reported and said a team has been sent to the area to collect firsthand information.