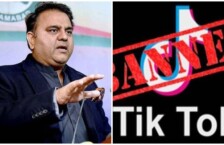 Taking to Twitter, Chaudhry warned of consequences Pakistan will face in case it did not carry out judicial reforms.

“Pakistan will never come out of its economic crisis if judicial reforms are not undertaken,” he tweeted.

“I’m baffled after reading yesterday’s verdicts on suspension of TikTok and the removal of the NBP president, and can’t help but wonder: what are our courts doing?” asked the information minister.

Chaudhry noted that Pakistan, already, was suffering from losses worth billions of dollars due to “judicial activism”.

This is not the first time the minister has criticised the court’s verdict, especially those concerning digital apps in Pakistan.

In February, the minister had said judicial activism in the past set back Pakistan’s technological progress.

Speaking at the International Media Conference in February, Chaudhry had lamented that Pakistan’s relations with digital media companies deteriorated due to some court decisions taken in 2014.

He had regretted the Pakistan Telecommunication Authority’s decision to block TikTok last year.

“I plead with judges not to hear cases relating to digital media,” he had said.

The minister had highlighted that if Pakistan does not alter its state policies, it will never be able to attract foreign investment. “Political and economic independence molds an individual’s life,” he had said.

Why did SHC suspend TikTok, again?

The SHC’s ruling came during a hearing on a petition filed to suspend the app Monday, where the court issued a notice to the attorney general of Pakistan and directed him to follow the orders and get the app suspended.

Presenting his arguments in the court, the petitioner’s lawyer said the Peshawar High Court had earlier banned TikTok as some videos uploaded on the platform are “immoral and against the teachings of Islam.”

The lawyer had said his client had approached the Pakistan Telecommunication Authority (PTA) before moving the court, however, the PTA did not do anything in this regard.

Back in April, Pakistan, for the second time, had officially lifted a ban on China-based ByteDance’s app TikTok consequent to a local high court’s order.

This was done almost a month after the same judicature had directed the state-run telecommunication authority to “immediately block access” to the short-form video-sharing service.

However, the PTA had also issued a stern warning to TikTok against “vulgar and objectionable content”, which it was told to remove.

The “PTA has issued directions to the service providers to unblock access to the TikTok App”, the authority said in a press release shared on Twitter.

“However, the TikTok App management has been told to ensure that vulgar and objectionable content are to be made inaccessible in accordance with the PECA provisions and directions of the Honorable Court,” it warned.