Addressing a seminar on “Freedom of Press and Resolution of Media Crisis”, he said the modern technology has disrupted the existing system and formal television channels will be replaced by digital media very soon.

“Technological advancement is replacing the traditional television channels into YouTube channels on a fast pace and the journalists have to adapt the latest technologies”, he said.

The federal minister conveyed that the present government will introduce the first-ever digital media policy this year.

Under this policy, a big chunk of advertisement budget will go to the digital media. The advertisements of social media will be bigger than the formal media during the next five years, he said.

Referring to the former President of the United States, Obama’s statement of 2013, the federal minister said that Obama has well said that it will be a great challenge for the governments as well as politicians to manage the information war.

This problem is not being faced only by Pakistan but the whole world, he said.

Chaudhry Fawad said it is the basic responsibility of the government to bring improvement in the lives of the citizens.

The government wanted to create such an atmosphere where difference of opinion may exist without any violence. 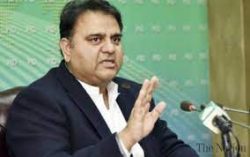