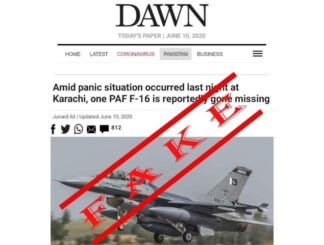 A screenshot of a fake news story doctored to look like an article on Dawn.com surfaced on social media on Wednesday.

The fake screenshot, shared on Twitter, attempts to mislead the public by suggesting that a Pakistan Air Force (PAF) F-16 fighter jet has gone ‘missing’ during a ‘panic situation’ in Karachi.

The fake screenshot — widely shared by Indian Twitterati — has surfaced on the same day that Indian media reported “panic” in Karachi on Tuesday night following what they called were rumours of Indian Air Force fighters crossing the Line of Control (LoC).

The image is cropped to show only the fake story’s headline and is doctored to resemble news articles on Dawn.com. However, certain grammatical and stylistic deviations point to the glaring inauthenticity of the screenshot.

Firstly, a sans serif font has been used for the headline while the site uses a serif font. The line serving to separate the headline and the author is light grey in the fake screenshot while Dawn.com uses a prominent black coloured line.

Additionally, the colour of the font used for the author and the timestamp in the fake screenshot appear to be different. Similarly, the font below the Dawn logo for today’s newspaper appears bold; on the real site the font is not bold.

Moreover, the icons for sharing the story on social media have been compressed in the fake screenshot using a photo editor. Similarly, the wrong font and colour have been used to indicate the number of comments on the fake story.

This is not the first attempt to mislead the public by circulating fake news using the Dawn brand.

Earlier, in April a fake social media post doctored to pose as Dawn.com surfaced on Facebook and Instagram attempting to mislead the public by suggesting that Army Chief Gen Qamar Javed Bajwa had been “possibly infected” with Covid-19 and falsely claimed that he was under self-quarantine.

In October 2018, another fake screenshot of a news story attempted to mislead the public by suggesting that PML-N leader Maryam Nawaz was expecting and falsely claimed that “Dawn news” had obtained her medical reports.

Earlier in August that year, yet another screenshot of a fake news story falsified to look like an article on Dawn.com had surfaced on social media, in an attempt to mislead the public by implying that Pakistan Tehreek-i-Insaf leader Faisal Vawda had withdrawn a petition against the alleged corruption of Karachi mayor Wasim Akhtar.

In a similar occurrence, in June 2018, a fake Facebook post screenshot doctored to pose as Dawn.com was shared on social media. It attempted to misinform the public and stakeholders by suggesting that Afghanistan had accepted the Durand Line as an official border.

The doctored imakge had led to the Afghan National Security Council (NSC) to issue a press release that mistakenly assumed the post was legitimate.