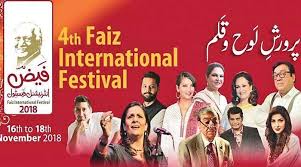 This mega event is perhaps the biggest congregation of the renowned writers, intellectuals, artists, peace and human rights activists not only from Pakistan but from many other countries of the world , predominantly from India.

There would be more than 40 sessions in all during Faiz International Festival. Renowned literary personalities, artists and intellectuals would be participating in the highly enlightening sessions and express their views.

Numerous promotional campaigns for the Faiz International Festival have been ongoing for the past week. Invitations were sent to different personalities..

Indian film director and writer Muzzafar Ali will also be joining Azmi at festival. The participation of well-known Indian personalities in the festival proves to be a step in the right direction, contributing to the betterment of relations between the two nations.

Talking to The News on Thursday night , Salima Hashmi said, “It is an honour for us to host this event and have numerous guests at the festival. Everyone who participates is a guest of honour for us.”