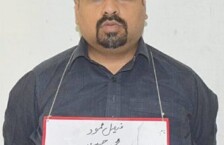 KARACHI: A worker of the Muttahida Qaumi Movement, Faisal Mehmood alias Mota, on Tuesday petitioned the Sindh High Court against capital punishment handed down to him by an antiterrorism court in the Wali Khan Babar murder case.

He was arrested along with many others during a raid in and around the MQM headquarters, popularly known as Nine Zero, and Khurshid Begum Memorial Hall in Azizabad on March 11.

Faisal Mota was sentenced to death in absentia by an ATC in March 2014 for masterminding the 2011 murder of television journalist Wali Babar in the city.

The 28-year-old journalist was shot dead in his car on Jan 13, 2011 in Liaquatabad when he was going home from his workplace.

On Tuesday, the counsel for the convict filed an appeal with the SHC assailing capital punishment handed down to him in absentia by the ATC in the murder case.

It was submitted in the appeal that the death sentence could not be awarded in absentia as per the antiterrorism law.

The convict’s counsel contended that according to Sections 21-L and 31-A of the Anti-Terrorism Act, 1997, a death sentence could not be awarded in absentia.

He argued that the convict must refer to the trial court under the law in case of punishment in absentia. However, the counsel said, his client was unable to refer to the ATC in Kandhkot — where the sentence was announced — because the records of the case were at the SHC.

He asked the court to set aside his client’s death penalty and send the case for a fresh trial.

The appeal is expected to come up for preliminary hearing before a division bench after its scrutiny at the SHC registry.