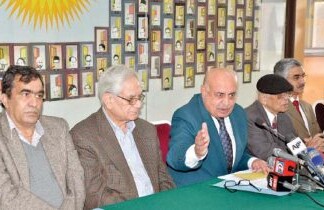 ISLAMABAD: Progressive Urdu writer and poet Fahmida Riaz was nominated for the Kamal-e-Fun Award 2014 on Tuesday, by a jury selected by the Pakistan Academy of Letters (PAL).

The Kamal-e-Fun award is the highest literary award in the field for the recognition of lifetime achievement in creative and research work. The prize is worth Rs500,000.

The award has been given since 1997, and those nominated include prominent literary figures such as Bano Qudsia, Jamiluddin Aali, Sobho Gianchandani, Ahmad Nadeem Qasmi, Mushtaq Ahmad Yusufi, Abdullah Hussain, Afzal Ahsan Randhawa, Mohammad Ibrahim Joyo, Shaukat Siddiqui and others.

Talking to Dawn, Ms Riaz said she was happy to see that Pakistan is becoming a real liberal state.

“In the past, I faced criticism because of my writings. As many as 14 cases, including a case of sedition, were registered against me during Gen Ziaul Haq’s tenure. Now, nomination for the award by the government department really shows that things are changing in the country and we are moving in the right direction,” she said.

Ms Riaz has been living in Karachi with her husband Zafar Ujan, and has been working for Oxford University Press.

PAL chairperson Dr Qasim Bughio, at a press conference on Tuesday, said that while PAL had selected the jury – chaired by the intellectual Masood Ashar – PAL had no role in choosing award nominees.

Mr Bughio also announced the National Literary Award for 2014, which will be given to the best literary books written in 2014 in Urdu and other Pakistani languages.

He said that 11 writers would be selected as the writers of the ‘best books’ in 2014 in various categories. However, not a single book written in English was selected for the award.

“Although six books in English were submitted for the award, all of them were declared substandard by a panel of three judges, so it was decided not to give an award to any book in the English category,” he said.

According to the panel’s decision, the Dr Allama Mohammad Iqbal Award for Urdu poetry was given to Imdad Hussaini for his book ‘Dhoop Kiran’. The Baba-e-Urdu Molvi Abdul Haq Award for Urdu prose was given to Tahira Iqbal for ‘Zameen Rang’ and Dr Shakeel Pitafi for ‘Pakistan Mein Ghalib Shanasi’.

The Syed Waris Shah Award for Punjabi language texts was given to Zahid Hasan for ‘Qisa-e-Aashiqan’, while the Shah Abdul Latif Bhitai Award for Sindhi works was given to Taj Baloch for ‘Jadeed Adab Jo Tajzio’.

The Khushhal Khan Khattak Award in the Pushto language category was given to Dr Abdul Qudus Asim for his book ‘Da Zama Kitab De’. The Balochi Mast Tawakli Award was given to Ghafoor Shad for ‘Balochi Classical Sahiree’, and the Seraiki language Khwaja Ghulam Fareed Award was given to Habib Mohana for ‘Setlan De Dagh’.

The Taj Mohammad Tajal Award in the Brahui language category was given to Zauq Brahui for his book ‘Marrdata Daghare Jehlawan’. The Hindo language Saeed Ahmad Ali Award was given to Hasam Hur for ‘Qisa Khwani Kahenta Kuhar’. The Mohammad Hasan Askari Award for best translation was given to Dr Amjad Ali Bhatti for ‘Punjab Lok Reet’.

Dr Bughio said that each winner will receive Rs100,000.

Mr Ashar told Dawn that the nomination of Ms Riaz for the Kamal-e-Fun was a unanimous decision.

“There were many proposals from different jury members, but after a debate, a unanimous decision was made,” he said.

Mr Ashar was unwilling to disclose the names of the other writers considered by the jury, because he believed doing so would create a controversy.