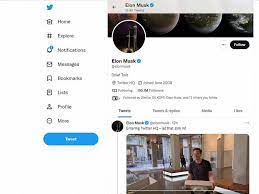 The rollout of Twitter’s subscription service has prompted a string of accounts impersonating public figures, sparking concerns about the potential for scams and disinformation.

Multiple accounts posing as politicians, celebrities and corporate brands have been suspended after being identified as inauthentic.

The impostors had paid the $7.99 required to display a verified blue tick — an identifier previously reserved for notable people or institutions — under changes brought in by new Twitter owner Elon Musk.

There are steps people can take to determine whether a Twitter account with a blue checkmark is authentic, including checking the account’s handle, creation date and how many followers it has — and noting who is following it.

For example, one account purported to show NBA star Lebron James requesting a trade from his team. James’ authentic handle – @KingJames – was created in 2009 and has more than 52 million followers. These include other NBA players and the Los Angeles Lakers, his team.

But the account that impersonated him used the handle @KINGJamez, came online in November 2022 and had fewer than 200 followers, according to archived captures.

For accounts verified for notability, it says: “This account is verified because it’s notable in government, news, entertainment, or another designated category.”

“Many of these impostor accounts are posting overtly inflammatory messages,” Evon said. “If the account is posting something newsworthy, has it made the news?”

Twitter, which did not respond to an AFP inquiry, has rules against misleading and deceptive identities. Musk tweeted Sunday that “any Twitter handles engaging in impersonation without clearly specifying ‘parody’ will be permanently suspended.”

But the problem remains.

“It has simply become more difficult to determine credibility on the platform,” said Gordon Pennycook, a behavioral scientist at the University of Regina.

“I rebranded an old account in less than five minutes, got the verification immediately using a Revolut card in my own name, then was able to use the account for two hours,” said Whelan, head of video and social at the London-based Times Radio.

Other copycat accounts used paid badges to pretend to be lawyer Rudy Giuliani, the video game company Nintendo, and Twitter itself.

The new ease of obtaining a blue badge makes media literacy more crucial than ever, as the new system could open the door to disinformation from accounts posing as government leaders and agencies, health officials, weather channels, financial advisors and more.

“This change opens so many possibilities for bad actors that it’s going to be difficult for fact-checkers to keep up,” Evon added.—AFP