Face-matcher: another e-step towards Punjab immunisation

LAHORE – Punjab Expanded Program on Immunization has introduced face-matcher in android-based application E-vaccs for checking wrong reporting by vaccinators.
Upgraded application will help checking that one picture is not uploaded multiple times with entries of different children.

EPI Punjab Director Dr Munir Ahmed has told The Nation that E-vaccs and its upgraded version E-vaccs-2 have helped improving monitoring, coverage and performance of vaccinators.

By April 2016, EPI will introduce further upgraded E-vaccs-3 that will include father and guardian number of every child. Through an arrangement with mobile companies, parents will be conveyed 2-3 days in advance the date and name of due vaccine for their child.

At every fixed EPI center, the parents will be able to get the vaccination status of their children and see when next vaccination is due.

The E-vaccs-3 will be linked with Vaccine Logistics Management Information System, software through which vaccine supply and logistics are digitally tracked from provincial office to districts. Through the interface, stock, consumption and wastage of vaccines will be digitally tracked.

“It is hoped that the routine immunization will further improve in ongoing survey.”
EPI introduced E-vaccs-1 in September 2014. Android-based smart phones equipped with GPS were provided to vaccinators for marking attendance and uploading their progress. The system helped in curbing absenteeism and compiling the coverage data besides tracking the movement of vaccinators through GPS.

The E-vaccs-2 was introduced in July 2015 as trial in three districts-Gujranwala, Multan and Vehari.

The application was introduced in entire Punjab in September with added features like E-vaccs Card. The card carried a picture of every child, with a unique ID and record of all vaccine doses. The digital card is uploaded at a database maintained by the Punjab Information Technology Board (PITB). The vaccinators take a picture of every child from their smart phones and the data of the child is updated with PITB.

Thus the record of every child’s immunization history is maintained with name, photograph, address, age and timeline and is accessible to the health managers. 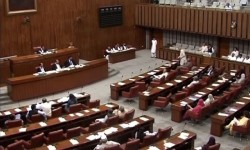