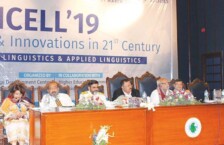 HYDERABAD: Eminent natio­nal and international linguists speaking at a two-day conference said that technology boom was bri­nging about a lot of changes in Eng­lish. They also called for promoting all languages as a Unesco report suggested that out of around 7,000 languages of the world, 90 per cent would vanish within this century.

The conference titled ‘First international conference on English language and linguistics’ carrying the theme, ‘Challenges and innovations in 21st century’ started at the Mehran University of Engineering and Technology (MUET), Jamshoro, on Saturday. It has been organised by the university’s English Language Development Centre, (ELDC).

Delivering his speech through a video link from United Kingdom, noted linguist and writer Prof David Crystal described this century as a “century of change” saying that rapid changes were being witnessed in the world and English was also changing day by day. He attributed the changes in English to a technology boom.

He observed that “there are many Englishes” and gave the examples of “Pakistani English”, “Indian English” etc. This language, he said, is not the property of the British or Americans. “Non-native speakers will become owners of their English while ownership of native English speakers is tapering off,” he said, adding that it’s difficult to say whether the number of English speakers would increase or decrease amid the rapid changes in the world.

Teachers Development Centre (TDC) Karachi director Prof Abbas Husain said that in developed countries, children were educated in their respective native languages up to grade-5. He said that there was no controversy about it there but in Pakistan, people tended to politicise the issue.

“We have turned knowing of English into an issue of knowledge and wisdom. Sadly, English is a marker of class. People who learn English show that they belong to another class,” he said.

ELDC director Dr Habibullah Pathan, who chaired the conference, said: “English speakers are rising day by day and they will increase to over four billion by 2050”.

He termed English “a killer language that has overpowered the world”.

He claimed that there were around 7,000 languages spoken in the world and 90pc of them would vanish within this century as a Unesco report suggested. He said that linguists must evolve a comprehensive strategy to save native languages but importance of English could not be ignored.

Prof Dr Madhu Sharma from the Mount Wachusett Community College, USA, said: “Everyone agrees that vocabulary knowledge is crucial for English as second language (ESL) learners to understand others or express their own ideas and to be successful in academic areas”.

She stressed that linguists must address the challenges. Both the native and international languages should go side by side for a better understanding.

Speaking as chief guest, Prof Qalandar Shah Lakyari called for promoting local languages, especially Sindhi, whose existence was at stake. He said that there were many owners and caretakers of English. He urged Sindhi youths to learn Sindhi for its survival.

Speaking as the guest of honour, Cadet College Petaro principal Commodore Mehboob Elahi Malik said that if somebody wanted to get higher and quality education, he must learn English to gain command on a specific subject.

As many as 40 parallel oral presentations by researchers were simultaneously held in eight rooms while a cultural night featuring events like heritage, traditions and folktales, drama Moomal-Rano, Sufi raag of Shah Abdul Latif and other great Sufis are part of the conference.

Prof Dr Francisco Marcos Marin from the University of Texas, Prof Dr Fauzia Shamim from Ziauddin University, Karachi, and Prof Dr Rafique A. Memon from University of Sindh were among those who also spoke.