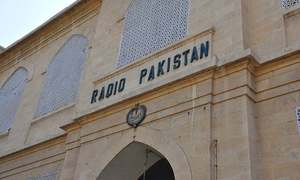 QUETTA: Employees of the Pakistan Broadcasting Corporation (PBC) have protested against what they claimed the Balochistan government’s plan to take over the precious land of Radio Pakistan and close some program from the Sariab transmitter.

A large number of the protesting employees, led by PBC’s United Staff Organization chairman Ahmed Nawaz Niazi, gathered outside the PBC building here on Friday, carrying placards and banners inscribed with their demands. The protesters chanted slogans against the government and marched on roads.

They announced that the PBC employees would not allow anyone to take over the precious land of the low power transmitter (LPT) and would resist the provincial government’s move.

Speaking at a press conference, Mr Niazi, organization’s secretary general Mohammad Ejaz and president of Quetta zone Akhtar Baloch announced that the union would go to any extent to resist the provincial government’s plan to discontinue the Sout-ul-Quran transmission.

They said that 64 acres of precious land was purchased by Radio Pakistan from private owners for establishing the LPT transmitter in 1954 and since then it had been relaying radio programm in different languages, including Brahvi, Balochi, Persian and Pashto, and defending the national narrative of Pakistan. “Radio Pakistan is guarding the frontiers of Pakistan through its regional and national program,” Mr Niazi said.