KARACHI: The early morning session on emerging writers may not have commanded the kind of crowd that was seen thronging George Galloway’s talk or the book launches for the more established Pakistani English novelists. But those who had rushed their Sunday morning breakfast (or skipped it altogether) were in for a treat. For one thing, by now Kamila Shamsie, Mohsin Hamid and HM Naqvi traverse a familiar path, and their routines, influences and reasons for writing are familiar to regular visitors of the Karachi Literature Festival. One already knows which way the conversation will go, who will rib whom, and what kind of story will emerge. On the other hand, looking at the programme, one did not quite know who Kashif Raza was, or what kind of book Masud Alam had written.

“If you’re not friends with any of these writers, you must be wondering why you are sitting here,” started off Mohammed Hanif with his typical deprecatory humour, introducing the writers. There was Shazaf Fatima, whose novel How It Happened has been receiving positive reviews, Syed Kashif Raza, who’s out with an intriguingly named book of poems, Mamnoo Mausamone kee Kitab, and Masud Alam whose travelogue Chalo promises to be uproariously funny.

The audience was fully engaged as the writers started reading out excerpts. With Shazaf Fatima reading “Dadi’s list of attributes a suitable bride for her grandson must possess” from her satire on arranged marriage, the audience kept disintegrating into laughter at the central character’s foibles.

“Everyone must have a shoyfriend,” commented Hanif, when Shazaf had mimicked Dadi’s idiosyncratic speech.

Next up was Syed Kashif Raza, and even those who had initially been put off by his sartorial choice of a bright peach shirt found themselves captivated and breaking into spontaneous applause at the visceral beauty of his poem, “Maarey Jaaney Walone Ke Liye”, based on a political incident. Kashif continued with a few romantic poems which prompted Hanif to shift uneasily in his chair, “I’m just making sure that there are no children here,” he said.

Kashif, who has a day job as a senior producer at Geo, talked about the difficulty of writing while simultaneously working an 8 to 9 hour shift at a media outlet. “When I see the news on Geo I often get the distinct feeling that a poet has been writing it – there are often rhyming words,” Hanif said in a deadpan voice.

Masud Alam, also a journalist, had the audience in stitches as he read out from the chapter “Motorway se Sharbat Chowk” from his travelogue. Asked if the perception that travel broadens horizons was true and if his journeys had made him any wiser, he thought for a moment before confessing “I don’t think so.”

With two Urdu writers and an English in attenance, the question of language was bound to come up. Shazaf admitted to Hanif that she had never considered writing in Urdu. Hanif’s response was disconcerting but funny “This is an old publicity stunt. Whoever wants to be a ‘bara aadmi’ says he doesn’t know Urdu.”

And if the success of a session is judged not by the number of people who attend it, but its ability to influence you to buy the writers’ books, this one scored 10 out of 10. 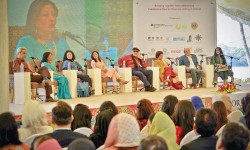