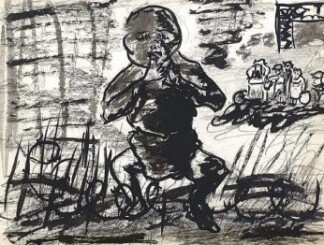 KARACHI: Can madness be eloquent? According to a Shakespearean character, Polonius, from the play Hamlet, madness can have a method to it. That’s the idea the New York-born French-Italian artist Peter D Bove seems to espouse through his formidable body of work. An exhibition of his paintings and drawings titled Eloquent Madness opened at the Alliance Francaise on Thursday.

There’s much to admire in the show, foremost of which is the uninhibited approach in dealing with the dichotomy that exists between body and soul, not to mention the subjects that get sandwiched between the two ends of the spiritual spectrum. What’s even more interesting is that fact that you cannot decide as to whether Bove prefers soul to body or otherwise. The exhibit called ‘The Couple’ (oil on paper) is a fine illustration of it. The characters exude ennui of a strange kind. There is absence of the soul in the imagery that the artist has come up with, but herein lies the rub. Looking deep into the two-faced nature of the protagonists reveals the quest for moving away from the body.

Bove’s study of the human condition is sharp. Ironically, the sharpness stems from the complexities that, almost unavoidably, contribute to that condition. For Bove ‘The Genius’ (India ink on paper) cannot be explained in lucid terms. Hence, the option of using ink and drawing a picture in which (black) blotches and smudges take over the imagination, wreaking havoc with childlike ideas about life.

In ‘The Married Women’ (watercolour/India ink) and ‘The Pickpocket’ (watercolour on paper) Bove examines societal issues with artistic acumen. It is strong evidence that he belongs to that breed of artists who have what a poet philosopher calls ‘negative capability’. This means the ability to see the world without having the wish to understand its inherent contradictions.

The exhibit in which Bove’s imaginativeness livens up his craft like no other painting or drawing is ‘Swimming Muse’ (linoleum cut). It is an artwork that eloquently comments on the creative process and celebrates it with a fair degree of madness.

The exhibition will continue until Feb 29.