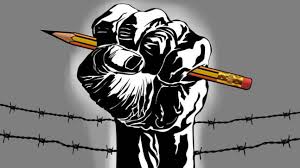 When the most imminent journalist of the world, John Pilger, argues that there is a global war on journalism, he is not wrong. When he says that there’s a global war on dissent, he does not exaggerate. And Pakistan has joined this war as well as it had joined the war on terror in the past. The government of Pakistan Tehreek-e-Insaf (PTI) does not like criticism of its actions. The present government is setting a dangerous precedent for the times ahead as the official twitter account of the party in a series of tweets tried to gag press criticism by deeming any such activity as a possible anti-state action.

Though the PTI has distanced itself from the sinister twitter campaign, it is evident that McCarthyism is the government’s preferred tactic against any critical opinion in opposition to its policies. PTI’s information secretary Omar Sarfaraz Cheema denies the accusations that the government is after critical voices in the country. However, he finds it hard to say that the accounts that made the tweets are not PTI’s. Instead, he tries to beat around the bush. PTI cannot deny the fact that the tweets were made from its official accounts.

While the world considers Pakistani journalist the most rumbustious in the world, PTI wants to snatch away this accolade from Pakistan’s journalistic fraternity. The tweets made by PTI’s official account and other accounts that participated in the campaign are nothing but an attempt to make browbeating and the standard and accepted practice against dissent.

It is an obvious fact that whenever governments fail on making political arguments in favour of their policies, they gag critical voices by labelling them as agenda-driven, foreign-funded and anti-state. PTI’s government is no different than any other government in this regard. And amid the controversy, emerges the irony of all ironies when Prime Minster’s (PM) focal person, while defending the hashtag “JournalismNot Agenda”, said that the government wanted to educate the journalists on constructive criticism.

It is true that no government likes criticism of its actions and policies. However, PTI, as a political party, needs to learn that “dissent is the highest form of patriotism,” that it can ask from any individual as one of the most celebrated American historians Howard Zinn said once. Thinkers and journalists criticise their countries for the love they have for their homelands not to further any anti-sate or foreign driven agenda. The sooner the PTI government understands this, the better it will be for the political stability of the country.