Charles Prestwich Scott or C.P Scott, was a British journalist and publisher.

He uttered the famous words, “Comment is free, but facts are sacred,” laying down ground rules for people associated with print or electronic media.

It is rather unfortunate that newspapers (and later electronic media) in Pakistan never heeded this sane advice.

Urdu Newspapers, even before Partition, regarded themselves more as propaganda machines and emphasis on factual accuracy was negligent at best.

Propaganda, by definition, is supposed to bend truth according to a guiding ideology.

After partition, the Urdu press continued down the ideology-laden path while major English dailies tried to buck the trend.

Successive military regimes defanged the press of its objectivity and by the fourth decade of the country’s existence, most newspapers were full of so-called journalists pursuing the ideology dictated by Rawalpindi or Raiwind.

Recently, a former editor of ‘The Nation’ made the accusation that “the paper’s editorial line is shifting rightwards towards a Washington-sympathetic line.

” She also pointed out that during her reign, “there was a strong emphasis on factual accuracy”.

For the record, during the tenure of this former editor, the paper was mired in controversy.

According to some reports, the whole editorial staff resigned upon hearing the news of her arrival.

Hardly two months after she joined as editor, the front page of ‘The Nation’ branded the South Asian correspondent of “The Wall Street Journal”, Matthew Rosenberg, as a stooge of the CIA, Israeli intelligence, and the US military contractor Blackwater.

In the same month, ‘The Nation’ accused award-winning Australian photojournalist Daniel Berehulak of being a ‘Mysterious US National’ and an agent of the CIA.

The ‘accused’ journalists have, since then, left Pakistan.

Commenting on the Daniel Berehulak story, internet-based media watchdog ‘Pakistan Media Watch” commented: “Weaving fantastic stories out of rumour and innuendo is nothing new to The Nation, but yesterday’s article by Kaswar Klasra represents a new low in journalistic ethics and could result in the murder of fellow journalists.

Mr Klasra claims that journalists in NWFP and FATA are secretly spies for foreign intelligence agencies.

A news story on the political pages about Dr.

Aafia Siddiqui published in February 2010 stated that, “The coming together of the US, Israel, and India, in an unholy alliance to tighten the noose around a Muslim lady reflects the new realities of global power politics.

First: The timing comes at the peak of US pressure for the Pakistan Army to begin its operations in North Waziristan Agency.

Mere coincidence or not, every time the US has wanted the Pakistan military to commence an operation in FATA, there have been such acts of terror prior to the commencement.

Second: The incidents happened when Pakistanis were celebrating Youm-i-Takbeer, the anniversary of our going overtly nuclear – something that still is not acceptable to the West and Israel.

Third: What is equally relevant is that our Government and our national security managers need to seriously look into how friendly spy agencies from West Asia and the US-UK were allowed to establish direct links to Kashmiri freedom groups based in Pakistan, especially central and south Punjab, during the Bosnia war.
’
In May 2010, Pakistani-American citizen Faisal Shahzad tried to blow up Times Square in New York City.

Madam editor wrote a scathing article in reply, asking the Pakistani government to retaliate against the United States.

The best bit in her article was the following advice: “In the aftermath of the Clinton threat, at the very least shouldn’t the Pakistan government suspend cooperation with the US, at least temporarily? Should our ambassador not convey our displeasure at this overt threat? Stoppage of NATO supplies and the downing of a drone will send a clearer message than any apologetic mumblings from the leadership.

Finally, is our military prepared to compromise our defence and security, target more Pakistani civilians, simply to do US bidding and commence a premature and hasty North Waziristan operation?”

Her anti American posturing led her to be fired by two very different news organisations.

As can be seen from the few examples provided in this article, the former editor was not really bothered by ‘factual accuracies’ when she was at the helm.

Threatening the lives of fellow journalists, cooking up conspiracy theories after a tragedy and jingoism wrapped in nationalist colours doesn’t help her case when talking about the non-existent ‘right-wing swerve’ in this paper witnessed (only) by her.

It wouldn’t have mattered if she had been the only journalist indulging in such practices.

Unfortunately, a huge bulk of media industry in Pakistan is twisting facts to suit a particular narrative every single day.

Unless we sort our own house out, we can’t perform the duty that the media is supposed to do, i.
e. keeping the rulers on their toes. 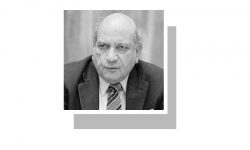