The ‘eastitist’: Ajmal Hussain may be lost but his work lives on | Pakistan Press Foundation (PPF)

The ‘eastitist’: Ajmal Hussain may be lost but his work lives on

KARACHI: For some of us, life is often mundane and drab, as if wrapped in a constant shade of grey. For others, it is forever brimming with colours. The late Ajmal Hussain fell into the latter category; as his daughter Samira Hussain-Friggeri summed up, “Even his tears were as bright as a rainbow”.

Samira was speaking at the opening of a retrospective exhibition of Hussain’s work at the Alliance Francaise de Karachi Art Gallery, which also included the launch of his biographical volume ‘The Life and Art of Ajmal Hussain – The painter of the East’.

“He knew that the road from talent to achievement is long,” elaborated Samira. For Ajmal’s daughter, the painter was not an aesthetic but what she termed as an ‘eastitist’ due to the overpowering Eastern elements in most of his works. “He believed there is only language worthy of communication, and that is beauty.”

The son of former Dawn editor Altaf Hussain, Ajmal started his career as a political cartoonist for the newspaper. “He was a man gifted with the pen and the brush alike,” said Nusrat Nasrullah. “I hope we as a society do more for him than just this exhibition.”

As his career progressed, Ajmal worked as the editor of Sunday magazine for Dawn and Illustrated Weekly of Pakistan. In the 1970s, he moved to France and had studios in London, Paris and Karachi. Such was Ajmal’s talent, and so renowned his work, that he was the first Pakistani artist to have a solo exhibition in Germany.

The artist passed away earlier this year in April, at the age of 88, while his last exhibition in Pakistan was held in 2010 at the Goethe Institut. But Ajmal was more than just a painter or a cartoonist. He was also an adviser to the likes Liaquat Ali Khan and Mohammad Ali Jinnah. “His book not only depicts his art but takes you on a journey about Pakistan’s birth and history,” said Tauqeer Muhajir, publisher of Ajmal’s biography.

He was inspired by French impressionists in his early days but went on to explore all medium and dabbled in several different forms of art and this collection of his last works celebrates him as a colourist, a draughtsman and an experimentalist. Works displayed have been done using more than eight different medium; metallic colours of gold, copper, oil, gouache and luminous oil pastel, carpet and pottery.

It comes as no surprise then that Ajmal is often referred to as ‘the man of many arts’ in art circles.

“He was so passionate about art that it consumed his entire life,” said art critic Marjorie Husain. “He loved experimenting with different mediums, just like Picasso.”

And just like Picasso, cubistic forms, geometric shapes and organic motifs have been meticulously merged with dominant figurative icons in his compositions.

“Ajmal often thought of himself as a gypsy by nature, constantly on the go, travelling, experimenting and discovering – in art and in life,” said a close friend, Jalaluddin Ahmed.

Like the mediums used, his work consists of various genres of paintings; each different from the other. Some of his paintings show vibrant colours with high contrast, while others are a play of strokes and spray paintings and lines. Several works are inspired by cubism and have a certain simplicity about them. The stories conveyed in each painting are not necessarily deep, but they are easy to understand and they often put things into perspective.

Dabble in whatever he may, Ajmal’s talent and penchant for the beautiful shone through. The exhibition, perhaps the last ever of one of Pakistan’s greatest ever painters, will go on till November 30. 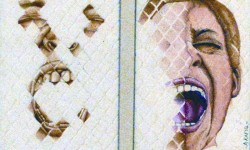 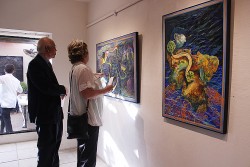 Art galleries: the more the merrier? 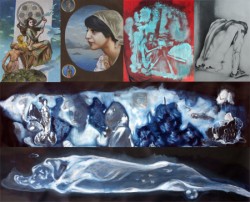