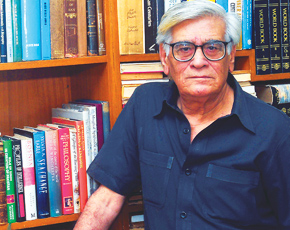 KARACHI: Quresh Pur spoke Urdu as if he was stringing his sentences together reading from the Farhang-i-Asifiya. Eloquence was his middle name. But it was not a matter of conscious articulation; his eloquence was rooted in erudition. He was a voracious reader. He knew his Gulistaan, Bostaan like the back of his hand and had read whatever Proust and Balzac had penned. He was familiar with iambic pentameter and at the same time adored Ghalib whose couplets he recited at the drop of a hat. It wouldn’t be wrong to say that Quresh Pur’s colleagues and friends were in awe of him. He commanded respect, merely because he was a knowledgeable man.

There was a time when Pakistan Television had a long list of ‘highly qualified’ people and it was almost a prerequisite for all those who were supposed to appear on screen that their pronunciation should be spotless. One of the reasons for Kasauti’s unprecedented success (the show that he anchored) was that all three of its permanent members (Obaidullah Baig, Iftikhar Arif and Quresh Pur) could articulate themselves — it gelled with the show’s intrinsic idea.

This writer still remembers a meeting with the iconic comedian and actor, the late Moin Akhtar. When asked who he thought was the best television host in Pakistan, he replied without thinking twice: Quresh Pur. “Not even a thousand Moin Akhtars could measure up to Quresh Pur sahib,” was the actor’s tribute to his senior.

One may have thought, if Quresh Pur died, there would be at lest a thousand men and women taking part in his funeral. Not to be. On Aug 5, when Quresh Pur breathed his last, there were not even a dozen men to take his coffin from Madina Masjid Nazimabad Number 1 to the Paposh Nagar graveyard. Three elderly men and two young boys from the neighbourhood where he lived, two young men who were his relatives, PTV’s Zafar Akbar, Asif Ansari and actor Fahmid Ahmed Khan were the only funeral attendees. And the media? There was just one TV channel to cover his last rites. The rest perhaps were busy recording a cricket match at a local gymkhana.

Should that surprise us? Of course not. That’s the kind of society we’ve become. Now there would be talk shows on television and radio on which Quresh Pur will be remembered by dignitaries from different walks of life. They will recall how well he spoke and how well-read he was. They will shower eulogies on him for inculcating the love for knowledge and book reading in the public. But they won’t be able to tell anyone that it surprised the few young men who gently lowered him in his grave that when one of the two TV producers at the gravesite said ‘Quresh Pur sahib, Khuda Hafiz-o-Nasir’, because that was his famous Kasauti sign-off line.

And one more thing: what happened to the routine exercise of press-releasing condolence messages by the country’s rulers? 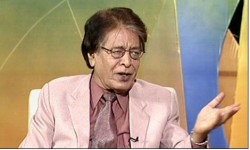