‘Do you use YouTube, minister?’ | Pakistan Press Foundation (PPF)

“Do you use YouTube, Minister?” I asked. “No, because it is not allowed,” she replied sounding a little taken aback. “Do you think your internet experience has been qualitatively compromised since that ban?” I followed up. “Yes, of course, it has,” she replied again. I thanked her for her time and left her office.

My meeting with Anusha Rehman, the State Minister for IT and Telecommunication, had just concluded. Anusha Rehman reached out to me after I wrote a letter to her as part of my column for the News on July 15. I had asked her primarily about YouTube and gave an argument as to why the unbanning of YouTube is not only unjustified, but the reasons for the continued ban equally preposterous. In her phone call, she said that there was a misunderstanding about the whole issue and that she wanted to share her side of the story with me. Therefore, we set up a time for the following day and we met in her office, and in all fairness perhaps this is an issue the specifics and bureaucratic hurdles of which most have not yet been able to fully appreciate.

It is a common misconception that the decision to ban or un-ban any website is vested within the Minister for IT and Telecommunication. The power actually rests with the IMC (Inter-Ministerial Committee). The IMC has only two members from the IT Ministry and the rest come from the Ministry of Interior, the agencies and other government institutions. Anusha Rehman herself admits that she herself didn’t know that this was not her jurisdiction until she was informed by her ministry officials. The IMC was set up in 2006 to specifically look into the issue of web related censorship by Prime Minster Shaukat Aziz after the “Jyllands-Posten Danish Cartoon” episode.

The IMC has been reluctant to open YouTube, because there is no sure way of blocking all URLs (links) to this video. The inability for the blockade has multiple aspects to it. First of all, Google does not want to localize its presence in Pakistan because that will expose it to various laws and Pakistan government authority which at times is turbulent and changes rapidly. Thus, they argue they can’t set up a localized version of YouTube. However, a local version of google’s main site exists.

Secondly, one would need to actively search all of YouTube archives to locate each and every copy of the video and block each one. Which is impossible and labour intensive for one video, so imagine if the number of videos in question are in hundreds. Even if one spends that amount of time and man power on the project, what to do if a new copy or new blasphemous video is uploaded. As I mentioned in my article that the web by its nature is un-censorable, and, at the moment of writing, this article I have accessed the same video without the use of any proxy on three different websites. So, any hope of regulation can not occur without public engagement. The public will have to report the new content as it is created and becomes available to them.

Fourthly, there is no clear content regulation law and procedure in Pakistan. An effective mode of operation and policy directive is needed to ensure one website is not banned for over a year just because of one video. European countries do this very effectively; they have taken a strong crackdown on child pornography, which disgustingly is still not completely banned here! The Ministry of IT and Telecommunication is now looking into developing a solution to exactly this problem. Anusha Rehman recalls that on her first day on the job, her children asked her to unblock YouTube, and she had to tell them the next day that it was not under her authority. The solution has two parts to it—first, they will block all videos that currently exist on YouTube that may be deemed to be blasphemous or inappropriate. They have spent many hours doing this. They have successfully been able to do this on http:// (the internet) and https://(a more secure version of the internet).

Once this is done, and as she tells me it almost is, she will ask the IMC to un-ban YouTube. Then the second part will have public engagement that will be critical. The internet is too huge to monitor. 100 hours of video are uploaded to YouTube every minute. It will take a team of 90,000 people watching YouTube videos 24 hours a day to look through all the new uploads in a day! Then there is a tomorrow! The idea is for people to report material and get it blocked rather than going on the street and staging protests and destroying public property.

What is surprising that we have had to spend so many resources and so much energy just for one website and, specifically, one video. There can be a hundred more sites and a hundred more videos. We can’t block the entire internet, so perhaps what we need to do is use this part solution. Respect that everything can’t be blocked without being reviewed, and we must take part in this review process because; otherwise, it will never be possible to block objectionable content, and I fear one day we might just end up blocking the entire internet. And another important point, I want to make, is that people who want YouTube to be unblocked are not bad Muslims or traitors or paid people with agendas. They are genuine people, who learn from the site, who express themselves with the site, and use it to share information. These people are also citizens of Pakistan and have a right to access information that is beneficial to them and they want to access. 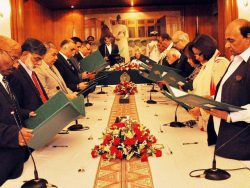