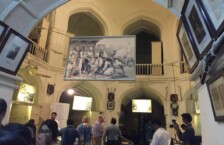 A modern archive is an interactive space. Far from the inaccessible stack of documents and the formidable looking archivists, the modern archive strives to make the place a part of a country’s everyday space. For example, if one goes to the National Archives of the United Kingdom in Kew, one would not only find historians and other scholars consulting the documents there, but also members of the general public, where they might be trying to understand a historical event in a better light or looking up their family genealogies.

One would also find school children, at times as young as in primary school, coming to use the archives as an interactive and public learning space. Through this process the historical holdings of the archive then become the shared and lived history of millions of people.

When we started the Punjab Archives Digitisation project, one of our high hopes was to transform the space of the Punjab Archives into an accessible and interactive area so that not just scholars, but other interested people might be able to come and utilise the space. While our intentions were right, there were some practical considerations too.

The Punjab Archives is located in the Civil Secretariat in Lahore, where all the major government departments are also housed. Hence, by its very nature it is a high security place and not easily accessible for the general public. Furthermore, the archives are themselves so cramped in the Tomb and the adjoining buildings, that there is hardly any space to expand and create newer spaces. Therefore, we decided to use the building of the archives, the fabled Anarkali’s Tomb, as an exhibition and interaction space itself. Anarkali’s Tomb is a living artefact and utilising it as a space to showcase the holdings of the archives weaved its centuries old history into the fabric of the modern archives we were building.

High on the heels of the start of the project, we inaugurated our first exhibition on May 31, 2019. For the exhibition curation we requested Ms Sadaf Chugtai, an artist who was at that time working at Information Technology University. Ms Chugtai had previously curated several exhibitions and we thought that it was best to start with this endeavour professionally. Ms Chugtai then spent a couple of weeks in the archives delving through mountains of documentation which we were sifting through. Since our mandate started with the great Revolt of 1857, Ms Chugtai decided to hold the exhibit upon that theme. Thereafter a few weeks of hard work amidst the rising heat of a Lahori summer, led to the first exhibition of the project, called ‘Fear and Vengeance in 1857.’

We inaugurated our first exhibition on May 31, 2019. Since our mandate started with the great Revolt of 1857, we decided to hold the exhibit upon that theme. A few weeks of hard work amidst the rising heat of a Lahori summer, led to the first exhibition called ‘Fear and Vengeance in 1857.’

‘Fear and Vengeance’ played upon the fears of the British that their rule was about to end in the wake of the Mutiny which started at Meerut in May 1857, and quickly spread as a general revolt in north and central India. The exhibit brought to the fore telegrams and letters of scared British officials in the Punjab, desperately tying to shore up their newly consolidated rule over the territory, (the Punjab had only been annexed eight years earlier in 1849), coupled by fears for British women and children who were quickly whisked away to safer places. The text was coupled with reproduction of lithographs on the Revolt which had been produced in 1858, visually showing the reality of the times.

Just as the ‘fear’ of the British was real, their ‘vengeance’ once the Revolt was under control was also patent. Harrowing lithographs of Indians being sentenced summarily and hung on trees, sepoys being tied to canons and blown to pieces, then visualised the deep thirst for blood and vengeance present in the telegrams, letters and reports of the British in the second half of 1857 and early 1858, as the Revolt was brutally suppressed. The juxtaposition of text and sketches, especially within the environs of Anarkali’s Tomb, made the events the exhibition covered real, powerful and effective.

The exhibit, for first time curated professionally within the archives, continued for a fortnight and brought people from far and wide to see it. In addition to the regular opening hours we requested the Archives Department to open the Tomb over the weekend too so that people might come and visit it at their leisure. To our surprise, both weekends we found people waiting for the Tomb doors to open even before we arrived to set things up! Thus, several curated walkthrough were led by Ms Chugtai and her team so that the visitors might be able to better grasp the items on display. I then led a group on a general tour of the archives, showcasing the work we had initiated.

One of the highlights of the exhibition — and one thing which really made it worthwhile for me — was the attendance of a large number of schoolchildren one workday. They had not organised the visit through us or anyone and simply turned up at the Tomb to have a look (as they should!). I happened to chance upon them and found interacting with them very stimulating. The manner in which they interpreted the displays, the questions they asked, and the issues they raised and discussed, all exhibited the superior intellectual abilities of our young people. I was glad that we were able to give them an opportunity to see and interact with part of their history so that they could become more informed and discerning citizens and human beings. That was our larger project and I was happy that we were making good headway in that direction.