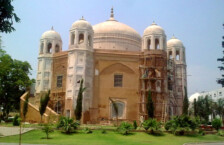 By the summer of 2018, the preservation, sorting, annotation, and preliminary scanning process had been initiated in the Punjab Archives Digitisation Project. Despite the sweltering heat of the Punjab summer, a small team sat at Anarkali’s Tomb delving into the centuries old record.

When the team members started to work, they did not even have the basics for their task as all of those materials still had to be procured through a long-winded government process. Therefore, I requested them to use their own resources for the time being so that we could at least initiate the work. With every passing day there was the danger of losing records, through the ravages of the climate, neglect, or simply the army of rats which infested the environs. I still remember that once when asked if the cat which frequented the Tomb had a name, a senior member of the Archives staff said that her name was ‘anti-rat.’ The cat was also perhaps playing her part in helping preserve the archive from being literally nipped away.

Thus work began at the Tomb in earnest, with one team member bringing his own laptop, the preservation officer buying her own mask and gloves and other equipment, and the research officers making notes on their personal note pads. All of them did not even have any place to sit, or any tables or chairs to use, and so they simply sat on the floor and did their work. It was sad to see this dismal state, but such is the work of pioneers I thought. My team was exceptional in that they did not complain too much and always persevered when I said that I am being told that all the required equipment was ‘coming’.

In order to keep the process streamlined we also created a robust reporting mechanism. The handling of each bundle (or basta, as it is called) was supposed to follow a set and recorded pattern. The first form would note the basics of the basta (dates, department etc), followed by its current state and suggested preservation.

This basta would then be thoroughly examined by the preservation team which would ensure that it is cleaned and properly set, and also give it whatever treatment it would require, according to its state of decay. All this would then be duly noted on the form. Then the basta would pass on to the bibliographical and research team which would verify the number and nature of the contents of the basta. They would also compare the stated and real number of files in the basta, and then tally its bibliographical information with the published press list.

Thus, another form would be generated noting what is actually in the basta, the topics it covered, and its correlation to the published press list. The bibliographic team would also give it a new catalogue number keeping it as close to the scheme of the India Office Records at the British Library as possible. The aim behind this measure was to make research easier for the scholars. So, for example, if there were file no ‘R/3/221’ in the British Library, and its back files were in Lahore, the catalogue data in Lahore would then identify the back files as ‘R/3/221/1’ and ‘R/3/221/2’ and so on. In this manner a researcher would know the larger connections of the data held in the Punjab Archives and would be able to triangulate it with archives available elsewhere.

While working in the Archives we also came across the nearly 1000 boxes of post-1947 record which had been saved from loss decades earlier, but which had not been touched since. As we had a few hands we could spare we lent a few members of our team to the Archives Department to open and sort these boxes — for the first time!

This was certainly a time consuming process and would be slow, but I was insistent that we follow this scheme so that we can fully know and understand the nature of documents held at the Punjab Archives and their larger context. Without this process, I thought, we would be seeing the Punjab Archives in isolation and take away the larger comparative aspect of archival research.

The next form in the process was for the digital officers who would then foliate (number each page) of each file, and then scan it accordingly. This form would then be verified by the qualify assurance officers as they rechecked the quality of the scanned documents, their correct order, and assign each file a unique bar code for identification purposes. After this process, the digital file would be stored, and the original sent back to the archive. Our ultimate aim was to make the whole scanned document searchable by included tagged words, but we knew that that was something not immediately possible and so we aimed to first put a full and completely searchable catalogue online followed by the full files.

Thus, the whole process included three comprehensive forms, which covered each and every process, from when the Archives staff handed over the basta to our team, to when it was returned at the end of the process. Such detailed paper work was important for two main reasons: first, it would enable anyone following us to easily learn and continue the process (issues of institutional memory and continuity are major in Pakistan), and secondly, it would allow us to identify mistakes in the process and rectify them easily. Also, with such a large number of files it was important to keep track of the movement of bastas and their contents.

Lastly, we also had a form for staff members where they noted and reported their weekly activities. This was important since government employees are usually blamed for being lethargic, and so it was important to keep verifiable records of what my team did so that they do not become sluggish.

While working in the Archives we also came across the nearly 1000 boxes of post-1947 record which had been saved from loss decades earlier, but which had not been touched since. As we had a few hands we could spare we lent a few members of our team to the Archives Department to open and sort these boxes — for the first time!

After a couple of months of research, experimentation, and review, Hussain came up with a very good catalogue scheme for the Pakistan period which largely continued the pattern of the British era. This idea was good since it exhibited a certain continuity of the record (especially as a number of the people making these records were the same pre and post independence) and also made the new cataloguing scheme recognisable and easy to use. Hussain also innovated one major change in the scheme: while the catalogue began with the identification of the department or subject, Hussain also inserted the full year in the scheme so as to make it more complete.

Meticulously following the ‘Rules of Business’ this new catalogue scheme also took into account the creation, merger and other changes in departments, so that at any time the catalogue does not suffer any complications with the changes in names or nomenclatures. This was a major contribution in the development of archives in Pakistan, and I am glad that it was done, especially to such high standards, even when it was not even part of the formal Digitisation Project and was undertaken as an extra. With the team members already doing so well in their main tasks, this level of initiative was certainly testament of their own interest in and commitment to the project, and also exhibited how, given the right culture, all government employees can not only do their primary tasks but also go beyond the call of duty for the public good.

With the organisational setup complete, our next task was to increase the interaction of the Punjab Archives with the people.