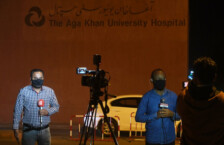 PESHAWAR, (APP – UrduPoint / Pakistan Point News – 31st Dec, 2020) :Federal Minister for Kashmir and Gilgit-Baltistan Affairs, Ali Amin Gandapore has said that journalists of D.I. Khan would also be allotted houses in Media Colony as per policy of the government.

He expressed these views while talking to a representative’s delegation of Dera Press Club that called on him under the leadership of president, Mohammad Yasin Qureshi on Thursday.

The minister appreciated provision of equal facilities and membership to all working journalists as per rules and regulations of the press club.

He said Dera Press Club will be the only club wherein a digital media studio will be established. He further said that a financial grant will also be announced for journalist community of D.I. Khan.