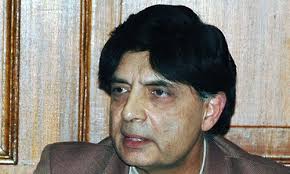 He was talking to German Ambassador in Pakistan Ina Lepel at the Punjab House on Friday. Pakistan-German relations, bilateral cooperation, the Pak-EU agreement on readmission of migrants, a new policy for international NGOs and the regional situation came under discussion at the meeting.

Referring to the readmission agreement, the interior minister said Pakistan’s stance vis-à-vis the issue of deportees was that the parties concerned followed international laws and protected the basic human rights of the deportees.

“We are committed to ensuring that the people involved in violating immigration laws of Pakistan or any other country and their facilitators are brought to book,” he added.

Chaudhry Nisar said the government acknowledged the concern expressed by the European Union over the issue of illegal migrants and was launching a crackdown on human smugglers within and outside the country to curb illegal movement of people to European countries.

He said that under a new procedure, the deportees were being interrogated to track down the agents who had sent them abroad, adding that hundreds of human smugglers, including most wanted human traffickers and proclaimed offenders, had been arrested in recent days on the basis of information provided by the deportees.

The minister said he would soon invite all European ambassadors to deliberate on strengthening Pak-EU cooperation, especially in the area of security and dealing with issues of mutual concern.

He said Pakistan valued its friendly relations with Germany and wanted to further strengthen these in all possible areas for mutual benefit of the two countries. While acknowledging Germany’s support for socio-economic development of the country, he assured the German envoy of all possible help in her efforts to cement Pak-German equation during her tenure.

The German ambassador praised the interior minister’s stance on the issue of deportees and said the two countries might also explore the possibility of a separate protocol on the matter.

About the new policy for INGOs, the interior minister said it was aimed at strengthening the government-INGOs partnership. It was encouraging to see that a large number of INGOs were applying for registration with the government under the new policy, he added.

The German ambassador praised the efforts of Chaudhry Nisar for streamlining the working of INGOs in the country and expressed the hope that his ministry would continue to provide all possible assistance to the INGOs in their mission to serve people in various sectors.

CASE AGAINST DEPORTEES: Meanwhile, the Federal Investigation Agency (FIA) has decided to register a case against 15 migrants who were deported from Greece on Thursday.

They were among the 49 deportees aboard a chartered flight which landed at the Benazir Bhutto International Airport. The FIA found 30 of them to have been illegally deported from Greece and allowed 19 to enter Pakistan.

After conducting a thorough investigation on the basis of their documentation, the agency had released four and decided to register the case against the 15 others and their agents under the law of the land, a senior FIA official told APP on Friday.

He said FIA had been directed to arrest the agents, most of whom hail from Peshawar, Gujranwala, Gujrat and Mandi Bahauddin.

The official said that over the past 13 days the FIA had arrested 234 human smugglers, including 48 proclaimed offenders and four most wanted human traffickers.