Dealing with infodemic: Journalists talk about fighting misinformation and disinformation 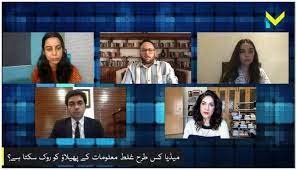 COVID-19 is not over and so is the infodemic that came with it. Fighting against it is as important as other steps everyone is taking to flatten the curve. Governments across the globe and World Health Organisation (WHO) have said that “infodemic” is as contagious as the virus itself.

Talking about it in a webinar organised by Global Neighbourhood for Media Innovations (GNMI), journalist Niha Dagia said that people tend to disseminate messages that reflect their beliefs. The uncertainty around the situation also pushes them to believe in messages.

“Misleading content is developed to manipulate opinion. It is designed to provoke emotional responses among the readers,” she said. “When we are anxious, we stop thinking rationally. We do not question the information. We do not question whether it is making sense or not. We do not confirm it either. We just pass it on.”

She said people forward any information they find online for two reasons. “They think it is true and must be shared with other people in their circles. They are dubious about its authenticity and want others to confirm it.”

“During COVID-19 pandemic the information flow was viral. Even doctors and other healthcare staff were struggling. The guidelines kept changing. The symptoms and social distancing measurement kept changing,” she added. “When there is confusion, people go for information elsewhere because one of the worst feelings is not knowing what is happening and that amplified during the pandemic. So, when you come across information even if it is misinformation, you just share it.”

The webinar was part of a series exploring infodemic in Pakistan and its effect on society, the role of women journalists in the fight against infodemic, ethical journalism, hashtag campaigns, and challenges to freedom of information in the digital age.

Journalists also talked about the challenges they had been facing in delivering news to their audiences. Journalist Kunwar Khuldune Shahid said that one of the roles of media was to filter excessive information, especially in the digital era.

“The role of a journalist has transformed in the digital age. Media is no longer just limited to accessing and sharing information but also to filter excessive information,” Shahid said. “Unfortunately, in Pakistan, we have a fixed template dictated by powers that be, where information has to adjust to a predetermined reality and not the other way around.”

Taking the conversation forward, Nayyer Ali said that there was a need to ensure a smooth flow of information. She also talked about online trolling and hashtag campaigns against journalists that not only affect their work but also their physical and mental health.

“Journalists are the main affectees of fake news. Even those on social media are talking about fake news who do not know what it is. A narrative has been building against journalists [on social media] with the help of [the term] fake news,” she said.

Journalists also discussed vaccine hesitancy and the role media could play to minimize it. Dagia said that journalists need to learn more about vaccines, their development and dissemination so they could report on them in a better fashion. She also said that the government should follow the anti-polio vaccination campaign to vaccinate people against COVID-19 in areas with high hesitancy.

The panelists shared their tips to deal with the infodemic and said journalists should double-check information from authentic sources before using it in their reports. They also suggested journalists use credible sources, info graphics, and media content where necessary, avoid negations and false claims in the reports.

They also advised them to stay connected with organisations and journalists working for digital rights, technology, and social media to remain updated on the latest developments.

GNMI is a Karachi-based not-for-profit organisation that works to promote innovation, excellence, and leadership in media. It believes in independent, pluralistic, and innovative media that empowers every individual, community, and democracy at all levels.