KARACHI: The last date for submissions for the ZM Award for Journalistic Excellence has been extended to June 15. The Pakistan Herald Publications Limited had earlier announced the inception of the award to recognise the contribution of seasoned journalist Zubeida Mustafa both to Dawn and to the field of journalism in Pakistan.

The award will be given every year in recognition of “the contributions of women in journalism. The award seeks to highlight issues and individuals so that a critical mass for change is created”.

It will consist of a citation along with a Rs100,000 cash prize.

Reports on any Pakistan-specific themes are acceptable, though preference will be given to “those that go beyond the areas of interest traditionally ascribed to women”.

Investigative news reports and news features can be entered. However comment, research and non-journalistic work are ineligible.

The award is restricted to reports published in Pakistan-based English-language newspapers and news magazines, as well as web-based publications, and the entries should have been published in the last calendar year (in this case 2012).

Women working as full- or part-time journalists with a Pakistani publishing house can apply, while freelance writers whose work has been published in an accredited Pakistan-based publication are also eligible to apply.

The entries must meet ethical guidelines and professional journalistic standards and rely on credible sources and data.

Further details, including guidelines, the procedure for submission as well as the application form for the competition, are available at http://www.dawn.com. 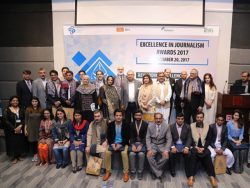