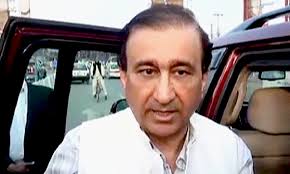 LAHORE: An accountability court is set to indict Jang media group Editor-in-Chief Mir Shakilur Rehman and two others on Jan 28 in a National Accountability Bureau (NAB) reference pertaining to a 34-year-old “illegal land allotment” in his favor that was allegedly manipulated by former Prime Minister Nawaz Sharif.

Mr. Rehman, who is on bail, appeared before the court along with his legal team.

A NAB prosecutor told the court that copies of the reference had been provided to the suspects.

The prosecutor also submitted a compliance report in the court about the attachment of moveable and immoveable properties owned by Mr Sharif, since he had been declared an absconder in the case.

Presiding Judge Asad Ali observed that no more challenge from the defence would be entertained with respect to the provision of copies of the reference.

He directed all the three suspects to ensure their appearance on the next hearing for their indictment.

The NAB in its reference alleged that Mr. Rehman had illegally obtained exemption of 54 plots, each measuring one-kanal, situated in Block-H, Johar Town. It alleged that the allotment of the land had been made in connivance with the then chief minister of Punjab, Nawaz Sharif, against the exemption policy and the laws for monetary gains.

It said the suspects caused a loss of Rs143.53 million to the national exchequer through the land allotment in violation of exemption policy.

The NAB had arrested Mr. Rehman, while other two suspects were only interrogated.