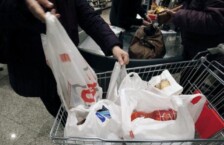 Minister of State for Climate Change Zartaj Gul said it was necessary to get rid of single-use polythene bags which were hazardous for environment.

Speaking at awareness session at National Highways Authority (NHA) headquarters she said ministry had planned to introduce plastic bags in the market which could be used 50 to 60 times and would be biodegradable.

She said that the ministry has launched a project named “ Apni Shahrah” (Our Roads) in collaboration with NHA under which saplings would be planted on highway from Khanewal to Multan.

The minister said plastic bags also caused flooding in the cities as they clogged water channels.

In this regard, she mentioned Karachi where sewers were overflowing flooding the metropolis.

Continuing its campaign to sensitise people and ensure support of masses for Clean and Green Pakistan, the Ministry of Climate Change (MoCC) on Wednesday distributed thousands of cotton bags at Federal Ministry for National Food Security and Research (NFS&R) to motivate people to avoid using plastic bags.

Advisor to the Prime Minister on Climate Change, Malik Amin Aslam, said that the radius of ban would be stretched to other cities very soon.

“Our country produced 55 billion polythene bags annually while around 75 per cent of country’s land was suffering desertification,” said speaking at a seminar at Arid Agricultural University.

Aslam said that there would be a complete ban of plastic making and usage in Islamabad and heavy fines on violators would be imposed.

Aslam said desertification is a major challenge to sustainable development in the country.

Addressing the participants of a seminar organized here on “Combating Desertification in Pakistan” by Pir Mehr Ali Shah Arid Agriculture University Rawalpindi (PMAS-AAUR) in collaboration with Sustainable Land Management Programme (SLMP) he said the challenges posed by changing climatic conditions had evolved and infiltrated the entire spectrum of human survival and progress. Out of 79.6 million hectares of Pakistan’s total land, 62 million hectares were vulnerable to desertification, he added

The advisor also told that most of glaciers in Pakistan were melting owing to which there was a constant threat of floods. He said that most of storm drains in cities were clustered with polythene bags which were a major cause of urban flooding.

He added that Pakistan was on top of list of countries affected most by climate change therefore the government launched 10 billion trees tsunami project across the country.

He said that collective efforts were required to eradicate desertification in the country. He said that university would completely co-operate with the authorities in this regard.

The ministry of Housing and Works has completely ban usage of plastic bags within the premises of ministry under Clean and Green Pakistan campaign.

This was announced by related minister, Shabbir Ali Qureshi, while addressing the ceremony of “Alternative Green Bags” at the ministry.

He said that his ministry was the first in the country to place plastic ban and it was an example for other ministries as well. He said that plastic bags were a menace for our environment and wildlife while a lot of precious resources were required to prepare them too.