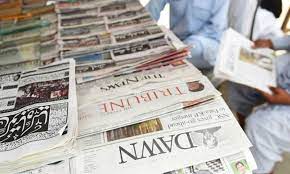 KARACHI: The Council of Pakistan Newspaper Editors (CPNE) has reiterated its commitment to meet the new challenges facing the media and said that all kinds of political, state, non-state and economic pressures on the media and freedom of the press would not be tolerated.

Measures like new PEMRA directives, the forcible removal of newspaper stalls, including unannounced raids on media outlets and newspaper printing presses, were serious obstacles to the promotion of independent media. These views were expressed by CPNE President Arif Nizami at the annual general meeting on Tuesday

The general meeting was attended by a large number of CPNE members from across the country. The meeting discussed the issues related to freedom of expression, freedom of the press, especially the print media. Despite the approval of the 85/15 payment formula by the federal government, the PID has slowed down the direct payment of advertising dues.

In this regard, CPNE also set up recovery cells for the recovery of PID dues in Lahore and Islamabad, including the Central Secretariat in Karachi.

The meeting unanimously passed a resolution approving all officials, including the current standing committee, to continue their responsibilities until May 2022. The meeting also elected Ali Kazam Waheed, Daily Times group editor, as senior vice-president.