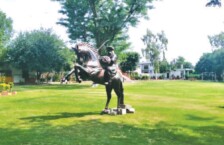 LAHORE: The community members of an area in Lahore are so smitten by the Turkish television series, based on the character of Ertugrul, that they have paid a tribute to him by erecting a statue in their neighbourhood.

The TV series, ‘Ertugrul Ghazi,’ originally Dirilis: Ertugrul in Turkish is being aired on the Pakistan Television in Urdu language and has been endorsed by Prime Minister Imran Khan himself.

The warrior in the statue in the Maraghzar Housing Scheme situated along the Multan Road is seen carrying a sword and riding a horse.

Muhammad Shahzad Cheema, the president of the Maraghzar Housing Scheme, says he decided to erect the statues of Ertugrul after some of the residents floated the idea of paying a tribute to him. Giving details of the project, he says these special statues have been made using fibre and metal in the city of Kamalia of Toba Tek Singh district.

“I won’t mention the cost of these statues; otherwise, their value would get the attention of the public,” Cheema laughs. “I went to Kamalia myself to place the order for these statues.”

At present, there are two statues that depict Ertugrul on a horse. One of them has been unveiled while the other is going to be erected soon possibly at a central place.

“We will call the place Ertugrul Ghazi Chowk,” says Sohail Anwar Rana, the secretary general of the scheme, referring to the location where the first statue has been unveiled.

Cheema says that while the entire country was enjoying the TV series and got acquainted with the historical figure after watching the show, he already knew about him. “I had read about him beforehand,” asserts Cheema.

“What has affected me most about this character is the way he united the entire tribe and formed the Ottoman Empire – this is something that the world’s anti-Muslim community cannot digest. Our kids may enjoy the show, but they should be able to also see him in artistic depiction – something physical they can marvel at”.

Pervaiz Hoodbhoy in his column in this newspaper has quotedMehmet Bozdag, thewriter and producer of the TV series, saying, “Facts are not important. There is very little information about the period we are presenting — not exceeding 4-5 pages. Even the names are different in every source. The first works written about the establishment of the Ottoman State were about 100-150 years later. There is no certainty in this historical data… we are shaping a story by dreaming”.

When asked about the accurate depiction of Ertugrul, Cheema does not give it much importance, saying that it does not matter because writers tend to take liberty through artistic licence, especially in TV programmes and movies. But what should be kept in mind is that under the Ottoman Empire, more than 30 countries were united – something that is a food for thought for the Muslims today, he says.

Ever since the unveiling of the statue, it has become a centre of attention of the people who have started gathering around hit to stand and stare at it or even to take selfies with it.

But not all historical figures are seen in the same way, especially by those who revere Ertugrul. A similar statue of Sikh Emperor Maharaja Ranjit Singh, who founded the Punjab Empire and ruled parts of, what is now Khyber Pakhtunkhwa, was unveiled last year in the Lahore Fort. However, just a few days after its unveiling, it was vandalised by members of an extremist religious organisation.

The people like Cheema though have a different perspective.

“As Muslims we should not give regard to Ranjit Singh as his rule led to antagonism against the Muslims,” he says, waiving aside the fact that the emperor, who hailed from Gujranwala, was one of the most important in the history of the land.