LAHORE: His pen created masterpieces that changed the face of Urdu literature. Many of the thoughts that must have brewed in his mind in the last seven years of his life were here, in this modest house a few hundred yards off Mall road in the neighbourhood of Lakshmi Mansion. This is where he penned Toba Tek Singh, Khol do and Thanda Gosht.

This is where legendary Saadat Hasan Manto spent the last years of his life. Manto gave Pakistan enough to deserve that his last residence be maintained as a site in his memoriam. But in a fast-paced world, commercialism seems to be taking its toll on things worth preserving. This house, thus, is likely to be turned into a shopping plaza of mobile phones.

Manto’s family has sold the house and is likely to shift out soon. “I spent many precious moments in this house where Abba lived, but it’s time to move. I don’t know what exactly will the new buyers do with the house but surely they are not going to preserve it,” said Nighat Patel, Manto’s daughter, talking to The Express Tribune while sitting in the living room of the house where once Manto lived.

The house looks like any other house but boasts of an extraordinary history. Most of the luggage has already been shifted out. Manto’s bedroom is in the use of his granddaughter Halima Patel. Bashir Patel, son-in-law of Manto, also lives in the house.

“This area became commercialized long ago. There are only a few houses left here; others have been sold and converted into shopping plazas. Mobility is an issue in this area. It’s not possible to call an ambulance here and we have to take my husband to hospitals many times,” said Nighat, adding that nobody from the government had contacted her to buy the house and preserve it. “During the caretaker government, there was some talk of preserving the house but nothing after that,” said Nighat without complaining or slamming anybody.

“The neighborhood of Lakshmi Mansion used to be a very peaceful locality. But when the Mall Road was expanded after 1990, many houses in the neighbourhood were converted into shopping plazas and godowns. The huge mobile phone and electronic market has now eaten up so much space that just a few dozen houses are left,” said Lala Khan, a resident of the area.

“The place has become very crowded now. At times, we feel we are sitting right in the middle of a bazaar. But we are still in a house where Manto lived,” said Halima Patel, granddaughter of Manto.

During the caretaker setup in Punjab, minister for health and culture Salima Hashmi put up a proposal to preserve the house where Manto lived. “We had gotten the drawing prepared of the house where Manto lived. We had written to the district coordination officer (DCO) about it. Our idea was that if a place like Pak Tea House could be established at Manto’s house it could have an international appeal and his fans from across the world could come and visit that place. We had limited time and the file was sent to the Archeology Department but I don’t know what was done on it afterwards,” said Hashmi.

Hashmi is of the view that there is a dearth of literary places in Lahore. “Manto’s house can be converted into one such place where a library and reading room can be established. He is one of the greatest prose writers in Urdu and his house should certainly be preserved,” said Hashmi.

“We had asked for DCO to buy the house. But when the caretaker government departed, nobody responded and the file was pushed under the carpet,” a senior official at the Archeology Department told The Express Tribune requesting not to be named. He said there were some 12 buildings other than Manto’s house about which the department had proposed different things but the files were never moved forward.

Leading writers and poets believe the government should play its role and preserve Manto’s house. “The government should buy the house from the new buyers on the same price or with little more profit, and preserve it. A sculpture of Manto can be put in that house. An ambiance resembling Manto’s times can be created. If that house is demolished or converted into a shopping plaza or godown, it would be a great injustice to literature,” said leading writer and Chairman of Lahore Arts Council (LAC) Ataul Haq Qasmi. He said he would propose this from the platform of LAC.

Poet Amjad Islam Amjad said that “Manto created masterpieces while living in this house. But the actual importance of this house is that Manto lived there; it should be protected for coming generations.”

Playwright Asghar Nadeem Syed said that the house would be a valuable addition to the city so it is first and foremost the city government’s responsibility. “After that, it’s the provincial government’s job. If it isn’t done then it’s the job of the federal government to come forward and have this house preserved,” he added.

“Manto is a legend. History will remember him but it will also remember those who couldn’t even protect his house,” he maintained. 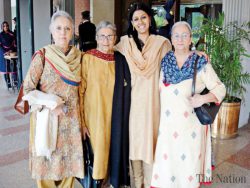 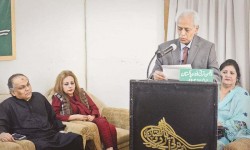