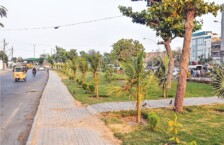 Karachi: After the removal of plant nurseries from Korangi Road following Supreme Court orders last year, the greenery seems to be slowly returning to the area.

The Cantonment Board Clifton (CBC) first planted grass tiles which have taken root and which have spread into a lush lawn. Recently, some 200 coconut trees have also been planted along one side of the thoroughfare.

Speaking to Dawn on Tuesday, Hassan Anwar, in charge of horticulture at CBC said that they wanted to maintain the green belts even after the removal of the nurseries, which was also according to Supreme Court directions. “The area measures 9.5 acres, both sides of the main road included. And 90 per cent of the work on one side, from the traffic signal near the National Medical Centre right up to Akhtar Colony, has been completed,” he said.

He said that in doing so they have thought of giving the green belt a park-like environment. “There will be lights installed and benches fitted and there will be plenty of flowers along with the coconut trees on one side with an urban forest planned for the green belt on the other side,” he shared.

About the coconut trees, it was explained that they were the Golden Coconut variety, which may grow up to 40 feet in height if they survive. As for the urban forest on the other side, it was said that it will have trees that are weather sensitive. “Yes, we specially wanted to plant trees here that look different in autumn or winter and wear a different look in spring or summer. That way the people would also be able to tell what season it is by just looking at the trees,” he said, adding that yellow flowering tabebuia tree or golden trumpet tree, as it is also known, would be one of the varieties planned.

Meanwhile, the horticulturist also shared some plans for Abdul Sattar Edhi Avenue, or Beach Avenue as it used to be called earlier. “There we are also developing a green belt along the Seaview Apartments,” he said. “We plan to plant date palms from Balochistan, which will do great in these weather conditions, along with peelu or miswak trees, which are also desert plants and would do well here,” he said.