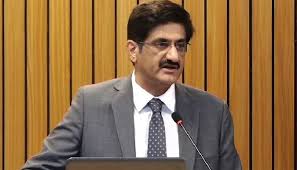 Sindh Chief Minister Syed Murad Ali Shah on Monday paid a surprise visit to various areas of District East and District South and expressed his annoyance at vehicles of car showrooms being parked on the roads and the presence of heaps of garbage on the roads.

The CM directed the relevant authorities to clear the roads and pavements of garbage and cars on sale. Sindh Local Government Minister Saeed Ghani and Adviser on Information and Law Barrister Murtaza Wahab accompanied the CM during his visit to areas including Shahrah-e-Quaideen, Tariq Road, Khalid Bin Waleed Road, Shaheed-e-Millat Road, Khudadad Colony and Saddar.

Murad alighted from his vehicle on Shahrah-e-Quaideen and called the DIG traffic and the commissioner Karachi to show them that owners of car showrooms had encroached upon the main road and the service lane by parking their vehicles.

“These roads are important in terms of traffic flow. How dare they [showroom owners] park their vehicles on them?” the CM remarked, adding that he had issued directives to the traffic police and the commissioner to remove such vehicles from the main roads and service lanes but it seemed that they had turned a deaf ear to his directives.

The CM took the DIG traffic to Khalid Bin Waleed Road, Tariq Road and Saddar and showed him that many showroom owners had parked their vehicles for display on main roads and service lanes. He directed the DIG traffic to start an operation the same day and report him.

Murad also directed the commissioner to call all the municipal commissioners of the District Municipal Corporations and tell them to ensure proper cleanliness in their areas. “Garbage is lying along the roads and the DMCs seem to be in slumber,” he said.

He inspected two underpasses being constructed on Shahrah-e-Quaideen at its intersections with Tariq Road and Khalid Bin Waleed Road. He reviewed the progress and quality of work and directed the project director on phone to ensure the completion of work by the end of June 2019.

The CM also visited the Empress Market where a compound wall was being constructed. He issued directives for the proper and smooth flow of traffic in the Saddar area.

The CM also directed all the provincial departments to start the process for recruitment of 41,000 employees between grade one and grade 15 against existing vacancies purely on merit and through a transparent procedure.

He presided over a meeting in this regard, which was attended by almost all the cabinet members, Chief Secretary Mumtaz Shah, Planning and Development Board Chairman Mohammad Waseem and all the provincial secretaries.

The CM said that there were 41,000 vacant positions in various departments. “I want to fill all these vacancies to improve the performance of different departments and provide employment opportunities to the deserving and eligible candidates,” he said, adding that the government would hire new employees purely on merit through a transparent method.

The recruitment of employees between grade one and grade four would be made on local levels through selection committees in which representatives of the finance, and services and general administration departments would be inducted.

The CM also directed the provincial secretaries to ensure that women and people with disabilities are also recruited as per their quotas specified in the law. The meeting also decided that recruitment of employees between grade five and grade 15 would be made through a testing service or a third party so that merit could be ensured.

Education Minister Syed Sardar Ali Shah was directed by the CM to start recruitment of teachers through a separate process. Murad said he wanted to resolve the shortage of schoolteachers in the provinces. The education minister assured him that teachers’ recruitment would be completed during the summer vacations.

It may be noted that the vacant posts of teachers are not included in the 41,000 vacancies in various departments.

Sindh Health Minister Dr Azra Fazal Pechuho pointed out shortage of doctors in the province and said a requisition to hire 1,700 doctors had been made to the Sindh Public Service Commission (SPSC). The CM said the doctors could be appointed on hospital-specific basis through walk-in interviews on a contract basis. “After six months they would be referred to the SPSC for their suitability,” he said.

The CM also presided over another meeting at the New Secretariat on the recovery of unconstitutional and unauthorised deduction from the provincial consolidated fund by the Federal Board of Revenue (FBR).

The CM said the FBR was reluctant to refund Rs7.05 billion which it had deducted from the provincial consolidated fund during 2012, 2015 and 2016. He directed his legal team to prepare a case against the board of revenue and file it with the high court. The meeting was attended by Sindh Excise and Taxation Minister Mukesh Kumar Chawla, Principal Secretary to the CM Sajid Jamal Abro, the finance secretary, the excise secretary, Director General Excise Shoaib Siddqui and others.

Chawla informed the meeting that his department had been recording protests at various forums such as the inland revenue department and the income tax tribunal against the unilateral, unjustified, unconstitutional and unauthorised deduction by the FBR from the provincial consolidated fund.

The excise minister said a series of meetings were held with the FBR/inland revenue Officers in Karachi and Islamabad but no concrete steps were taken to refund the amount of Rs7.05 billion at source deducted during 2012-13, 2015-16 and 2016-17 fiscal years. The CM said that though he had taken up the matter in the Council of Common Interests meeting held in September 2018, no appropriate decision to refund the deducted amount had been made. Murad directed his legal team to prepare a case and file in the court. “We will fight this case in the court because the FBR and the federal government has no intention to refund the amount,” he said.

Chawla told the CM that they had filed seven appeals, one of which was pending before a deputy director FBR. To this, the CM said he was ready to appear before the FBR officer. “I have no problem in appear at any forum but I am committed I’ll get these funds back because they belong to the people of Sindh.”

The CM was told that another appeal was pending before an inland revenue tribunal. The CM directed him to follow the case with full force and inform him when the next hearing is fixed so that he could also attend it. The CM also directed the finance department to work out interest on the amount deducted by the FBR since 2013 so that the interest could also be claimed.

He said he would write a letter to the prime minister against this injustice and urge him to issue necessary directives for the refund of the amount.