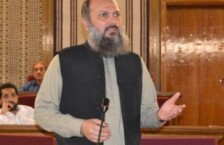 CM Kamal, who is also the chairman of the Provincial Environmental Protection Council, expressed his concerns over the lack of interest of the Environment department on this issue. He said the flawed policies and lack of sincerity have increased the problems of the province.

CM Kamal directed the provincial Environment department to share the environment protection rules with all government and private companies to control the environmental challenges in the future.