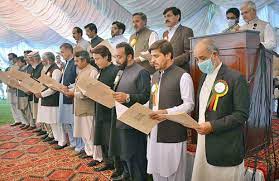 PESHAWAR: Chief Minister Mahmood Khan on Wednesday announced the establishment of Media Colony for journalists in the proposed Peshawar Model Town, a one-time special grant of Rs 20 million for Peshawar Press Club (PPC) and 100 per cent increase in the seed money of Journalist Welfare Endowment Fund.

He made these announcements while addressing the oath-taking ceremony of the newly-elected office-bearers of the PPC here, said an official handout.

The chief minister said the KP government was fully aware of the issues faced by the journalist community, adding all possible steps would be taken to resolve those issues.

He directed the relevant officials for necessary steps for amendments to the relevant law to enhance the annual grant-in-aid for the PPC and to prepare a PC-1 for the establishment of a digital studio there.

Mahmood Khan termed the media as the fourth pillar of the state and urged the journalist community to play their effective role in projecting the public welfare initiatives of the government.

He said the merger of ex-Fata into Khyber Pakhtun-khwa, completion of Bus Rapid Transit, Swat Motorway Phase-I and extension of Sehat Card Plus to all population of the province and other mega developmental projects were amongst the major achievements of the provincial government.

The chief minister said that Rashakai Special Economic Zone was ready for inauguration and hopefully Prime Minister Imran Khan would himself perform the groundbreaking of this mega project very soon.

He stated the KP government was working on other mega developmental projects including Dera Ismail Khan Motorway, Dir Expressway and Khyber Pass Economic Corridor, adding these mega projects on completion would help to promote mass scale trade and economic activities by integrating the different parts of the province.

On the occasion, the chief minister announced the nomination of late journalist Fakharuddin Syed for the civil award who had died of coronavirus last year. He also announced Rs200,000 as a medical aid for two ailing journalists of Peshawar.