ISLAMABAD: The Supreme Court said on Saturday that Chief Justice of Pakistan Mian Saqib Nisar did not have any social media account.

The public relations office of the court issued a clarification, declaring that all Twitter accounts in the name of CJP Nisar were “fake”.

“It is, therefore, clarified that Hon’ble Chief Justice of Pakistan is neither using any Twitter account or page, nor any other ID on any other social networking websites,” it said.

Despite the various directives of the apex court, the fake Twitter accounts attributed to CJP Nisar are still active. There are as many as seven fake accounts in his name, with two of them having significant numbers of followers. An account with Twitter handle @cjsaqibnisar has 33,900 followers. It was opened in July 2015.

Another with handle @MianSaqibNisar has 23,900 followers. It was opened in March 2017, a month before the first judgement in the Panama Papers case was announced in which the SC constituted a six-member joint investigation team to probe into assets owned by the family of then prime minister Nawaz Sharif.

The second account has been inactive since March 20, 2017, when the handler tweeted on this account for the last time. The second last tweet on this account was posted on March 17, 2017, which was a statement that the SC would announce its verdict in the Panama Papers case within a week.

The remaining fake accounts have fewer followers. An account with the title of ‘Chief Justice Saqib Nisar Fan Club’ was opened in March this year. It has 2,855 followers.

The apex court has asked the Federal Inve­stigation Agency (FIA) and the Pakistan Telecom­m­unication Authority (PTA) to block the fake accounts and take action against their handlers.

The clarification issued by the court says, “Concerned quarters ie FIA and PTA have also been asked to block such names and IDs, pages and take legal action against the delinquents in accordance with law”. Meanwhile, CJP Nisar has taken suo motu notice of water scarcity in a remote area of Balochistan.

According to a press release issued by the court, the chief justice took notice of non-availability of drinking water for people in Bhagnari area of Balochistan’s Bolan district.

The notice was taken on a video clip on social media and a programme telecast by a private television channel showing that people and animals of the area were drinking contaminated, polluted and unhygienic stagnant water from a pond near the Bhagnari area.

According to the press release, the CJP has directed the advocate general, chief secretary, secretaries of health and Public Health Engineering Department, the deputy commissioner of Bolan and representatives of the Balochistan government to appear before the apex court on Dec 14. 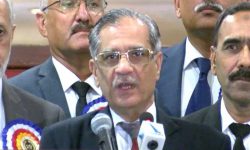 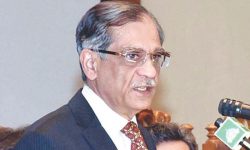