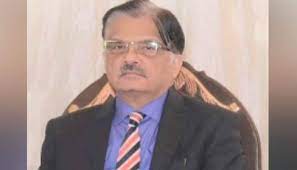 The Lahore High Court on Tuesday has sought a reply from the Pakistan Electronic Media Regulatory Authority (PEMRA) and other parties on the petition against the appointment of Chairman Mirza Saleem Baig.

According to the details, the bench conducted a hearing on the petition filed by Zaheer Uddin Babar, Anchor BOL News. The Federal Government, PEMRA, DG PEMRA, and Chairman PEMRA Saleem Baig have been made parties in the petition. Abuzar Salman Niazi Advocate appeared on behalf of the petitioner.

While hearing the case, Justice Shahid Kareem remarked that, “If PEMRA takes disciplinary action against the petitioner, the petitioner can approach the court.” Justice Shahid Kareem also raised the objection on the appearance of only one lawyer who was representing both PEMRA and its Chairman. However, the Justice remarked that there should be separate lawyers representing each of them. After hearing the arguments the court adjourned the hearing and sought reply on the appointment of Mirza Saleem Baig. It may be recalled that on June 28, 2018, the Ministry of Information issued a notification regarding the appointment of Mirza Saleem Baig as chairman of PEMRA. According to the notification, the Ministry of information appointed Mirza Saleem Baig to the post for the next four years on a contract basis. The Ministry of information issued the notification after the Supreme Court orders in this regard. The SC order came as a three-member bench headed by the then Chief Justice of Pakistan Justice Mian Saqib Nisar. Chief Justice noted that the search committee had nominated Baig for the post of PEMRA chairman