Centre, Pemra get notices on Ishaq Dar’s appearance in media 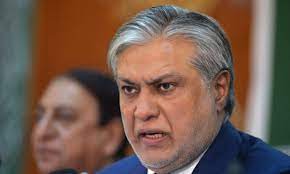 LAHORE: The Lahore High Court (LHC) on Monday issued notices to the federal government and the Pakistan Electronic Media Regulatory Authority (Pemra) on a petition challenging appearance of former finance minister Ishaq Dar in the media.

Advocate Azhar Siddique filed the petition on behalf of a citizen, pleading that Dar had been declared a proclaimed offender by different courts for not joining proceedings in different corruption cases filed against him. He said Dar had been living in self-exile in London and the law did not allow a fugitive to appear on television screens.

Siddique said Pemra had failed to implement its laws on political consideration and took no action against the news channels for inviting a proclaimed offender in their programmes and having his opinion on the economy of the country.

He asked the court to order Pemra to restrain the media from giving airtime to a fugitive of law.

Justice Shahid Waheed heard the initial arguments and sought replies from the respondents within a week.