Centre for excellence in journalism opens at IBA

KARACHI: An initiative for the professional training of journalists in Pakistan, the Center for Excellence in Journalism, was inaugurated at the IBA (city campus) on Saturday. The CEJ is a collaboration of the Institute of Business Administration (IBA), International Centre for Journalists (ICFJ), Northwestern University’s Medill School of Journalism and the United States Department of State.

Speaking at the inaugural session, dean and director of the IBA Dr Ishrat Husain said that at present 280 participants were attending the programme by covering 10 training modules and workshops. They included television production, editing, documentary making with workshops on emotional safety and handling trauma. The upcoming courses include news writing and reporting, editing for both TV and print media, as well as data journalism. “Last year in June, about 150 reporters and alumni of the US Department of State-funded exchange programmes congregated in this building to learn new tools of reporting and news gathering. Keeping that in mind, the IBA will soon introduce a master’s journalism degree programme,” he said.

Speaking further about the CEJ, he said it had an advisory board which comprised editors, assistant editors and news directors.

The CEJ, which is on the fourth floor of the Aman Tower, has a television studio of its own apart from editing rooms and a section dedicated to multimedia.

Vice president of programmes at the ICFJ Patrick Butler said the CEJ came to fruition through a grant by the US Department of State. “We are all in awe of the kind of work Pakistani journalists produce despite facing threats and intimidation. Many of the journalists I had met around five years back were unanimous in their opinion that there needs to be a training course for journalists. I’m glad we are finally able to do that,” he said. He added that almost a quarter of the participants during the exchange programmes organised by the ICFJ were women.

Chairman of the advisory board at the CEJ-IBA Kamal Siddiqi said that the number of working journalists in the country had risen from 2,000 to 20,000 over the years. Of them, he added, around 70 per cent did not have a degree in journalism. There’s been a considerable decline in the number of newspapers in the West whereas in Pakistan the print media seems to be enjoying sustainability, he said. “However, that does not mean that other mediums will not proliferate. From just one private television channel in 2002 we have over a 100 private TV channels now. Same is the case with print. There are 150 radio channels at the moment, though they only prefer playing music,” he added.

Acting director at the CEJ-IBA Christie Marie Lauder said it took heartfelt efforts from people working in different time zones to bring the project where it was today. “Our roles as media professionals are changing and learning these new tools is the need of the hour. Everyone from the press is welcome here to bring in ideas or to learn a new way of news gathering,” she said.

US ambassador to Pakistan David Hale said that trained journalists were at the heart of the free media and “we are glad to be a part of this process”.

Soon after the speeches were over, the members on the stage were asked to head towards the CEJ section on the fourth floor where Dr Ishrat Husain inaugurated the new section. 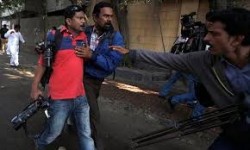 Over 45 scientists, academicians get training at MUET workshop 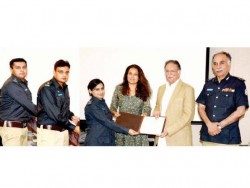