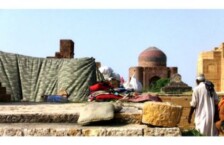 KARACHI: Two senior photographers and four novices came together for an exhibition, One Shot, being held at the VM Art Gallery to showcase a lesser-known form of photography – photo essays.

The event, which opened on Monday, is one of the two photography shows which are held at the VM Art Gallery every year, said Riffat Alvi, one of the curators of the show. Noor Ahmed was the co-curator of the show.

Veteran photographer Arif Mahmood displayed three frames in the exhibition. He said that during his recent trip to Nepal, he noticed the textural diversity and captured it in black and white compositions. Mahmood’s work is a reflection on the daily activities witnessed on the streets. He started working as a photographer in 1985 and since then, had taught the skill in many art schools.

In his opinion, there was no lack of talent when it came to photography in Pakistan but most artists limited themselves to the commercial side due to the potential of making more money. “Photographers need time and freedom to be innovative and different. When artists are busy worrying about their salary, they can’t be expected to document life or exhibit or publish books,” he said.

Bilal Danish, a fine arts student of the Beaconhouse National University, displayed three photographs taken at Sea View, Clifton. “I went there to capture migrating birds but I saw a boy making bubbles and liked the composition – it seemed as if the boy was stuck in an eternal bubble,” said Danish, adding that he also liked photographing protests. “It is an interesting time to be a photographer in Pakistan as the political scene is constantly changing.”

Among those who exhibited their works was photographer Rahmatullah Khan, who has been documenting Sindh’s archaeological and culture sites for the last 15 years. His black and white compositions depict the tales of Sindh. “There is immense talent in Pakistan, but we need to give them direction,” said the artist who is teaching photography at Alliance Francaise.

Four compositions on shortage of water in Thar were displayed by Uzair Akram. Photography is about capturing time in one specific instant – my photographs want to make the viewer think about the events that led to that moment and what followed after the captured instant, said Akram. “Good photographs make a viewer stop and look back at the image.”

Madiha Aijaz’s work focused on public places, her photographs showing the blurring boundaries between a public and private space.

Sana Burney’s photographs explore patterns of life, according to the artist. In one of her photographs, the world is seen through the horse’s lens. Her poignant photographs aim to investigate the behaviour of a life.

Nameera Ahmed’s work, depicting visual sophistication, captured the damage caused by the 2010 floods in Thatta, when thousands of people took refuge at the Makli tombs.

A gallery visitor, Aliya Yousaf, appreciating the photo essays showcased in the exhibition said that photography was a booming industry in Pakistan as the artists feel a sense of responsibility to document life.

“There is overdose of images in our lives but most of the images are fleeting as they leave no imprints on the film of our memory,” added Mahmood. Street photography has the potential to make society reflect on their lives and surroundings, he said, adding the art of photography hasn’t lost its value.

The exhibition, curated by Alvi and Noor Ahmed, will run till August 31.