Can the tree tsunami also spur a food forest surge? 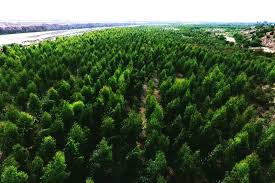 The area under forest cover in Pakistan has declined at alarming rates due to decades of neglect. Forests remain vital for maintaining a fragile ecological balance. They also curb pollution, preserve top soil, prevent excessive run-offs to lessen flood damage, and even help combat droughts by retaining rainwater. It thus goes to the credit of the PTI government to have popularised the idea of reforestation.

In 2013, the PTI started the so-called ‘tree tsunami’ in K-P. It is now trying to replicate this initiative nationwide with a 10 billion tree tsunami.

There are, of course, contentions surrounding the above initiative. The opposition claims that the number of trees already planted is hugely exaggerated. There are further concerns about the appropriateness of species being planted. It is certainly not easy to protect public forests from human predation, be it in the form of timber mafias, poor villagers who let cattle forage freely or collect wood for cooking, or from agriculturalists and property developers.

Yet, enthusiasts claim that the resolve of the government has already managed to hamper timber smuggling in K-P, and a cottage industry of backyard nurseries is now mushrooming across the country.

The idea of a ‘green awakening’ does seem to be spreading. Last year, the government held launch ceremonies across the country, where citizens helped plant 2.5 million saplings in one day. Now there are parallel tree tsunamis unfolding in Islamabad, Karachi, and Lahore.

The Commissioner’s Office in Lahore, along with the Lahore Biennale Foundation, has brought together several civil society organisations under the banner of Afforestation Lahore. This effort has set a goal to convert 10% of Lahore’s land into urban forests.

Another important issue that merits attention in the ongoing afforestation drives is of improving food security and not only regenerating forests. Many poor people who live around the remaining scant forest cover in the north of the country have reportedly been complaining that the rigidity of the tree tsunami campaign has undermined their ability to earn an income from wood cutting and by denying them access to wood used for cooking. One emerging possibility to address such concerns was to plant new trees which produce fruit that could in turn be sold by locals, to provide alternative incomes and used as a source of food. These suggestions do not seem to have been given much heed in K-P over the past five years.

There is, however, a possibility to address such concerns within more collaborative efforts such as Afforestation Lahore. Creating food forests is not an idea being imported from elsewhere. Recall how Sher Shah Suri had commissioned fruit tree plantations along the Grand Trunk route as a public service to facilitate travelers.

There are also existing models that can be studied and tweaked for our local conditions. Consider, for instance, how the Atlanta City Council in the US has recently approved a measure seeking to transform around seven acres of vacant property into a food forest that would be open to the public free of charge.

While Lahore is not Atlanta, a mechanism could be worked out to determine who should be allowed access to an urban food forest in Lahore, how often, and how much of the grown produce they can pick. Such a move would improve the environment, besides strengthening food security of the urban poor.

Instead of leasing out the proposed urban forests to contractors (as has been done with jamun trees lining the canal in the past), the Horticulture Department and a local NGO could jointly supervise and maintain the food-growing areas. Such food producing areas may be created within locations being demarcated for urban forests across Lahore. Lessons emerging from this experience could then be infused into the broader forestation drive across different urban and rural geographies of the country.