Call for strict enforcement of laws on religious rights 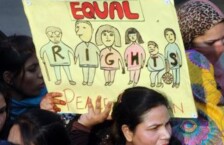 LARKANA: Speaking at a consultative workshop held at the Larkana District Bar Association office on Saturday, lawyers and activists of various civil society organisations called for strict implementation of international covenants on religious rights in order to ensure communal harmony and check extremism in the country.

“We have to work as a team to bridge gaps to promote religious harmony,” representatives of the host organisations, the Civil Society Support Programme (CSSP), Right to Expression, Association and Thought (REAT) Network, as well as those of the human rights organisations and leaders of the lawyer fraternity declared at the workshop Iqbal Detho, a human right activist, observed that religious intolerance in society was growing. He called for the abolishment of laws discriminatory against any religious minority. He stressed the need for building a society where followers of all religions and faiths could live together in peace and harmony.

He referred to Article 2, 6 and 27 of the International Covenant on Civil and Religious Right 1966 of which Pakistan is a signatory. He said that Article 20 of the country’s 1973 Constitution guaranteed human rights.

Mr Detho called for an effective implementation of the laws on ethnic, linguistic and religious rights.

The participants discussed the issues of alleged abduction of Hindu girls and their conversion by way of marriage, kidnapping of members of the community for ransom and other such grievances.

They urged the government to take appropriate measures to the satisfaction of the minority community for the sake of a peaceful coexistence.