KARACHI: The spirit and beauty of Japan was vividly displayed at the Japanese Calendar Exhibition 2016 held on Tuesday, with different facets of traditional and contemporary life in the country depicted in an array of breathtaking photographs.

Organised at the Japan Information and Culture Centre, around 130 Japanese calendars were part of an exhibition being held every year since 2009.

Consul General of Japan Akira Ouchi spoke about different shades of his home country and said that “Japan has a unique mixture of traditional and modern culture and a beautiful natural landscape”.

With the country experiencing all distinct four seasons, he said that “each season has a strong influence on the cultural diversity and the unique spirituality of Japan and they are often taken up as a motif in Japanese calendars”.

From the varied landscape of the countryside to the distinct bloom of cherry blossoms, Japan epitomises a haunting beauty that was beautifully captured in the ‘landscape’ section of the exhibition. This section also had several entries aimed to capture the essence of Mount Fuji, which is considered to be Japan’s highest mountain and worshipped as it is considered sacred.

The section dedicated to Japan’s traditional garment, Kimonos, was also popular among the attendees as it incorporated brightly coloured flower kimonos against the backdrop of Japanese gardens.

Ikebana, the Japanese art of flower arrangement, and bonsais also made an appearance in several calendars. Several cultural and heritage sites of Japan were also the subject matter such as the Himeji Castle, which is a symbol of Japan’s history and resilience and a national treasure as well as a world heritage site.

Unlike many other Japanese castles, it was never destroyed by war, earthquake or fire and has recently been renovated and reopened to the public early last year.

Sindh Minister for Culture Sharmila Farooqi was present to inaugurate the 2016 exhibition, and shared how this year marked a “hat-trick” with her inaugurating the Japanese calendar exhibition.

“The beautiful diversity of Japan that is exhibited in these calendars makes me feel as if I have taken a tour of the country,” she said.

“I hope that one day we will be able to take Pakistani calendars to Japan and display the beauty of our country too,” she added.

Sadia Rashid, president of the Pakistan-Japan Cultural Association, Sindh, spoke about how the event “celebrates the natural beauty of Japan and also highlights the cutting-edge technology that is being used in photography to capture these images.”

Vice chairman of the Pakistan Japan Business Forum Kalim Farooqui said that at all events at the Japanese consulate had “business and cultural representatives present side by side. This is because Japan is not just interested in economic relations, but gives equal importance to cultural relations and exchanges”. 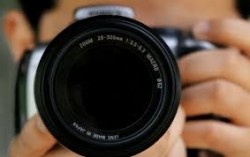