KARACHI – Adviser to Sindh chief minister on Information and Law Barrister Murtaza Wahab has said that the new advertising policy is being set up which will be brought to the cabinet to make fair distribution of public services.

He expressed these views while chairing All Pakistan Newspapers Society (APNS) meeting on Monday.

Barrister Wahab said like English and Urdu newspapers, local language papers will be provided financial protection and legal proceedings are being made for the cancellation of newspapers without a circulation.

In the past, the adviser said, these dummy newspapers were also obliged with the advertisements, now and after blacklisting these newspapers, the distribution of advertisements will be transparent.

Referring to the questions of the All Pakistan Newspapers Society’s representatives, he said that all the newspapers will be paid a pay-off by making a long term mechanism very soon.

Despite the rapid growth of electronic media, the provincial adviser added that the data of print media, newspapers and magazines are still available as a record.

Keeping the news industry alive, the PPP’s democratic government will bring all resources. Even in the past, the PPP believes in press freedom, Barrister Wahab added.

At the meeting, General Secretary of APNS, Syed Sarmad Ali, members Javed Shamsi, Younus Mehar and Mangal Das informed the provincial adviser the issues related to the newspaper industry. Talking to the media representatives after the meeting, he said that U-turn of Pakistan Tehreek-e-Insaaf would be twisted.

Meanwhile, the information department on Sunday cancelled the declaration of more than 70 newspapers who were published from Karachi, Hyderabad and Larkana.

They were dummy papers that were causing a loss to the provincial exchequer, said an information department official. 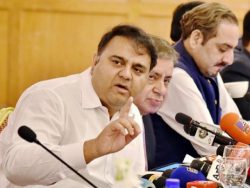