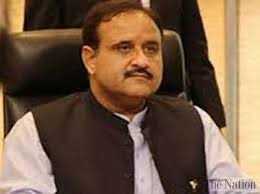 LAHORE: Inaugurating the development work of journalist colony’s F-block here at Harbanspura, Chief Minister Sardar Usman Buzdar said on Monday said that the citizens of Lahore demonstrated a socially responsible behavior on Sunday by remaining aloof from the meeting.

“I thank the Lahoreiites did not become part of illegal activity of the opposition which was not only unlawful and irresponsible but illogical in the backdrop of prevailing corona situation,” the CM said while addressing a ceremony.

The CM announced to complete the development work in his supervision adding that he will visit again to review the completed tasks. The journalist colony’s problems will be solved on a priority basis as it is my home as well, he said.

He said: “PM Imran Khan has announced to give “Sehat Insaf Cards” to every citizen and ‘Universal Health Coverage’ program is going to be started in the province, half of the population will be provided health coverage this year and every citizen will enjoy this facility in Punjab by 2021.”

He said that speedy development is being made on the mega-development package announced for Lahore.

In a statement, the CM thanked the Lahoreiites for ignoring the anarchist political designs of the PDM adding that so-called claimants of the City of Lahore have been badly exposed as the citizens have rejected their politics in toto.

He said the people have totally rejected the negative politics of the rejected elements, the political cabal tried to create unrest through their corner meeting which ended in chaos. The nation witnessed the failure of political designs of the PDM at Minar-e-Pakistan.

The CM emphasized that accountability of the corrupt PDM elements will be done and they will have to return the looted money.

Regrettably, those who plunged the country into crises are hiding abroad with their looted money, he added.

Special Assistant to CM Dr Firdous Ashiq Awan said that the citizens of Lahore have shown a mirror to the PDM as the failed power show of 11-party alliance is a wake-up call.

In a statement, she said heir-apparent of the house of Sharifs and her bondwomen should read the writing on the wall as the last nail has been put in the political coffin of the corrupt cabal.

Participation of a few thousand spectators is a slap on the face of PDM as December 13 has passed after December 8 and nothing has happened, she said.

She advised the PDM to shun negative politics if it has a bit of shame as the failed Lahore meeting has again exposed it.