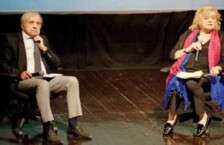 ISLAMABAD: The third iteration of the Women International Film Festival (WIFF19) screened Thirst, a Bulgarian film directed by Svetla Tsotsorkova, at the Pakistan National Council of Arts (PNCA) on Tuesday.

The sensitive story revolved around a family whose livelihood depends on water in a parched village.

The mother washes bed linens for the local hotels but with water scarce, the family pays a pair of water diviners, father and daughter, to locate a consistent source of water for them.

Beautifully directed with wide angle shots of an arresting landscape, the film captures the complexity of relationships.

The screening was followed by a question and answer session with Roumen Pirontchev, the ambassador of Bulgaria.

The festival, which opened on Monday, has selected films from around the world that engage and educate people on women rights, gender issues, child abuse, sexual harassment and stories of remarkable men and women who participated in the struggle for equality and empowerment.

The first screening on Monday was of the Spanish film Summer 1993, directed by Carla Simon, was an autobiographical tale of an orphan who makes a new life with her relatives in the countryside, addressing the loss of innocence that bereavement brings.

Monday’s screening was followed by an excellent discussion with the audience, moderated by film expert Gabrielle Kelly, and Ambassador of Spain Manuel Durán Giménez-Rico.

He said that five European movies, from Spain, Bulgaria, Italy, Austria and Sweden, would be screened till Friday, during an intense week dedicated to women and cinema at the PNCA.

WIFF19 is a five-day event showcasing films received from filmmakers from around the world on the themes of helping hands, child abuse and sexual harassment, in the form of short films, documentaries, public service announcements, and animated films.

The event will also host the second edition of the Parwaaz Film Lab, a three-day long film lab for participants from across Pakistan run by Gabrielle Kelly.

The 10 participants in the lab will develop narrative short film scripts following which online support will be provided to complete the screenplays.

Ms Kelly, a member of the Screenwriting Faculty at the American Film Institute Conservatory, said: “The opening night of the Women International Film Festival brings me back for the second year to Islamabad to celebrate the work of women directors. I programmed the EU-sponsored Sidebar of films directed by women from Spain, Bulgaria, Austria, Italy and Sweden, letting their voices join with the competition entries of the film festival itself, which shows shorter works from around the world.”

The jurors for the 2019 Short Films Competition included Hülya Demirden, a film festival director and advisor from Turkey, Seemab Gul, a British-Pakistani independent filmmaker, and Nic Careem, a social entrepreneur and philanthropist.

The shortlisted films will be screened on March 9 as part of the closing of the festival.