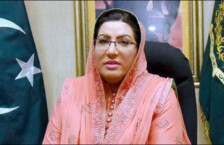 Special Assistant to Prime Minister on Information and Broadcasting Dr Firdous Ashiq Awan Friday said a committee was being constituted to overcome challenges that media workers, houses and the industry as a whole was facing.

“T20 match is always thrilling and our effort is that the T20 match between the journalist community and the government is turned into a friendly one, as the prime minister is keen on introducing the media as a power to fail the bids to defame Pakistan by hurting the national narrative and interests,” she remarked while talking to media persons outside the Parliament House.

Dr Firdous explained that she would be acting as a coordinator and things would hopefully be settled during 2020. She pointed out that while international agencies and institutions like the Moody’s and the World Bank acknowledged improvement in the country’s economy, the ‘media sector’ was still facing financial constraints.

For this, she blamed the elements who had put the country’s economy on a ventilator. She alleged certain vested interests in the garb of media freedom were trying to promote and safeguard own interests. She said it was unfortunate that the HR Commission on the World Human Rights Day could not raise its voice to global arena about the worst human rights abuses being committed in IOK.

“The HRC must have spoken loudly about Kashmir, which is Pakistan’s defence line and a national cause,” she asserted.

Dr Firdous said that the prime minister had taken notice of the downsizing in the media industry and he tried to ensure through personal communication with owners of media houses that people’s jobs remain secured.

She continued, “We succeeded in some cases but in others, we could not effectively communicate with the owners of media houses. Therefore, she said, the prime minister has decided that this issue will be settled once and for all and sit together to combat disinformation and work out strategy thereon.

She said people of a certain mindset were harming the national interest on an international agenda and they wanted to protect their own interests in the garb of media freedom.

The prime minister, in order to reach a permanent solution to this problem and to address problems faced by media workers, legitimate issues of media houses and future challenges of this industry, has formed a committee, which will include presidents of the Pakistan Federal Union of Journalists (PFUJ), All Pakistan Newspapers Society (APNS), chairman of Pakistan Broadcasting Association (PBA), an office bearer of Council of Pakistan Newspaper Editors (CPNE), whosoever the body nominates and the chairman of the parliamentary association of the media and other stakeholders. The government, she emphasised, would become a bridge between media house owners and workers and the committee would settle issues pertaining to the ‘revenue’ that was owed to media houses by advertisers, which includes pending dues by the government, and unpaid salaries of media workers as well as any other issues related to their jobs.

The committee would hear reservations over media restraints and would also summon people who talk about restrictions on journalists freedom and listen to their concerns individually.

Dr Firdous said certain persons, who were engaged in dissemination ‘information’ about freedom of media and under its garb, spread poisonous propaganda about Pakistan on social media, would be summoned and asked what they meant by media freedom.

Replying to questions, she said that the first introduction of advocate Hasan Niazi was that he is son of Hafeezullah Khan Niazi and added that attempts were being made to arrest him and he would face the law and be dealt accordingly for what he had committed at the PIC.

She emphasised that it was Prime Minister Imran Khan, who had strengthened the law and it would strengthen Pakistan.

Dr Firdous condemned the killing of a student at the International Islamic University and said Prime Minister Imran Khan was fully aware of the potential of the student unions, but there were two challenges before the government to rid the unions of arms and drugs.

She said a PML-N lawmaker was so ignorant that she asked on the floor of the NAabout the fate of the Information Commission. “Let me inform her that the Commission was launched in November 2018 and the information commissioner is discharging duties while so far 215 applications under the Right to Information Act had been received and out of these, about 100 already disposed of,” she explained