Body to revive past glory of Sindhi film industry in the works: minister

HYDERABAD: Spea­kers, among them legendary movie icons of Pakistan film industry, expressed hope for the revival and bright future of Sindhi film industry and proposed establishment of Sindh Film Development Corporation to translate the hope into reality.

They were speaking at the inauguration ceremony of four-day Sindhi Film Festival which started with a seminar on ‘Past, present and future of Sindhi films’ organised by the Institute of Sindhology at Sindh University (SU) on Monday.

Legendary film icon Mustafa Qureshi presented the proposal for the establishment of the corporation and said that with proper government interest, patro­nage by elite and hard work by people whose first love was film, Sindhi film industry could get back its lost glory.

Sindh Minister for Edu­cation, Culture, Tourism and Archives Syed Sardar Ali Shah who was chief guest at the event welcomed Mr Qureshi’s proposal and anno­unced the establishment of the Sindh Film Development Corporation and said that a meeting would be convened soon to chart future course of action in this connection.

He said the Institute of Sindhology should assume the responsibility of bridging gap between film-makers and provincial government in order to materialise the proposed project in an effective manner.

Eminent film producer Syed Noor said that he felt ecstatic to have received so much love at the university. “I am simply stunned to learn about such a rich and magnificent past of Sindhi film industry. And I won’t hesitate to admit that I have found it to be far better in many ways than even Punjabi movies,” he said.

He assured the participants in the programme that he would do everything in his power to help Sindhi films regain their lost position.

Noted scholar, politician and former bureaucrat Mehtab Akbar Rashdi stressed the need for generation of a market for Sindhi films in Sindh, Pakistan and the countries with considerable presence of Sindhi diaspora.

SU Vice Chancellor Prof Dr Fateh Mohammad Burfat who presided over the seminar said that he saw great prospects for the restoration and rebirth of glory of Sindhi films.

“I foresee this seminar as a pebble in the still waters of Sindhi films that ruled cinemas from 1951 to 1997 during which 83 stunning movies were produced and screened. This seminar has raised points that will certainly lead to revival of this rich past,” he said.

Earlier, the Institute of Sindh­o­logy director Ishak Sam­ejo presented mementos to individuals who had contributed in one way or the other to the promotion of Sindhi films in past.

A documentary by Pakis­tan Television’s veteran producer Dr Ghulam Mustafa Solangi outlining history of Sindhi films was screened at the seminar while students of the Department of Media and Communication Studies presented a mime on one of the most popular tracks from a famous Sindhi film which enthralled the audience and had them sway and swoon.

The luminaries present on the occasion also unveiled a sculpture of popular Sindhi folk singer Allan Faqir at the institute and inaugurated Radio Sindhology Service.

The festival will continue for another three days and will feature screening of popular Sindhi movies and discussion on various facets of Sindhi films. 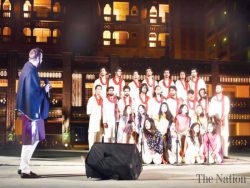