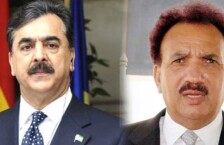 ISLAMABAD: Cynthia D. Ritchie, a Pakistan-based blogger from the United States, has accused senior Pakistan Peoples Party leaders of molesting her in 2011, a week after the opposition party filed a complaint with the Federal Investigation Agency’s (FIA) cybercrime wing against her for hateful comment and slander agai­nst slain prime minister Benazir Bhutto.

In a video message posted on Facebook, Richie alleged that she had been raped some nine years ago by then interior minister Rehman Malik and was physically manhandled by then prime minister Yousuf Raza Gilani as well as then federal minister Makhdoom Shahabuddin.

Claims to be in direct contact with FIA DG, after tweeting against Benazir

She said she had numerous voice recordings, text messages and screenshots, including from those who claimed to be PPP supporters from Saudi Arabia and the United Arab Emirates.

Referring to her ongoing battle with the PPP, she said it was not really about that tweet but about the individuals who know she had lot of dirt on a lot of people in this country. “It is primarily those who use and abuse others particularly women and vulnerable population. And I am one of them.”

Talking to a private news channel, ex-PM Gilani denied the charges and said he considered even responding to such allegations “humiliation and disgrace”.

The former prime minister questioned as to what the US citizen had been doing at the Presidency. She had come to Pakistan as part of a campaign to malign politicians, he alleged.

Mr Gilani said that those levelling allegation against a person of his stature should be ashamed of themselves. “Who has given them the right to malign the politicians?” he asked. He said the woman was maligning him, as his two sons had filed a defamation case against her for her defamatory tweet against Shaheed Benazir Bhutto.

Mr Gilani said the reaction of the PPP to her tweet was “severe and uncontrollable”.

Rehman Malik was not available for comments.