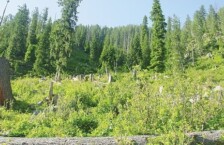 Peshawar: The saplings planted over hundreds of acres of land during the previous spring season in the merged districts of Khyber Pakhtunkhwa are in danger of dying after staff of the forest department abandoned their maintenance due to unavailability of funds.

Official sources said the office of the conservator forests for merged districts couldn’t get Rs90 million from the provincial government to clear bills of contractors and labourers hired for the spring plantation drive.

The plantation over 3,000 hectares of land in tribal districts is part of the 10 Billion Trees Afforestation Programme 2018-23 (BTAP).

“Our forest range officers and forest guards cannot go out of their offices for the maintenance of plants as contractors and labourers run after them to get their wages,” said an official.

He said contractors and daily wagers had staged protests in front of the offices district forest officers for payment of dues.

The data consolidated by forest offices shows that the department planted saplings over 3,126 hectares against the target of 6,095 hectares during the previous spring season in seven merged districts through different interventions apart from free distribution of 4475,000 saplings out of 3.6 million. However, funds have so far not been released to DFOs to clear the outstanding bills and continue the plant maintenance.

Sources said the row between the forest and tourism departments dating back to the alleged ‘biased role’ of the former in Malam Jabba land scandal had resulted in hiccup of release of funds for the new plantation carried out across the province, including merged districts under BTAP. The National Accountability Bureau is probing the high-profile land scam.

Officials admitted that the forest department was in hot water after two ministers opposed the approval of funds. The cabinet had deferred the matter for an indefinite period.

When approached, a senior official of the forest department acknowledged that the financial crunch had cast a pall over plantation in other districts of the province, too.

He said new plantation had become liability for the department due to delay in payment.

“The newly-planted saplings are at risk of dying if funds are not provided immediately,” said he said, adding that the department needed Rs1.8 billion to clear the outstanding dues of contractors in all districts, including merged areas.

Sources said the department concerned launched the spring plantation drive without the approval of PC-1 and release of funds from the federal and provincial governments.

He said the BTAP was an all-Pakistan project but the forest department launched the drive without approval of its PC-I.

“It is unprecedented to execute a project without approval of its PC-I,” he said adding that he thought some officials had overreacted by launching the drive in an attempt to inspire Prime Minister Imran Khan.

A senior official of the forest department insisted that PC-I for the spring plantation drive was approved and Prime Minister Imran Khan had launched tree plantation campaign in Haripur in Sept 2018.

He said plantation in merged districts was part of the federal government-funded Green Pakistan Programme, which was launched by former Prime Minister Nawaz Sharif in 2017.

The official was optimistic that the provincial and federal governments would allocate funds for the BTAP in the new budget.

The estimated cost of the five-year BTAP in KP is Rs27 billion to be equally shared by the provincial and federal governments.

The KP government has already carried out the Billion Tree Tsunami afforestation project at the estimated cost of Rs18 billion and grew over one billion trees during the last five years, according to the forest department.

The forest-covered area in merged districts is around 20 per cent and 19,000,000 hectares land is still barren.

Officials said the forest department would focus on merged districts and 60 per cent share of the budget under BTAP would be spent in tribal districts and the rest in others.

Under the BTAP, merged districts will get around Rs9.07 billion for the five years afforestation drive.