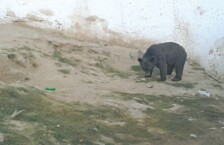 Lahore: Following a hue and cry raised on social media over the miserable condition of bears at Jallo Park, the wildlife department sprung into action, but not before several people condemned the government’s indifference to animal welfare.

In photos shared on social media, the bears kept at Jallo Park could be seen lying around in pitiable condition in their enclosure without respite from the scorching heat. There were also complaints that the cages were too small for them with little access to water.

Taking notice of the social media reports, Chief Secretary Yousaf Naseem Khokhar on Tuesday sought a report from the forest, wildlife and fisheries secretary. He directed that the repair – under way for two years – must be completed at the earliest.

According to the wildlife department, the repair work was accelerated on Mr Khokhar’s orders at the enclosures and a shade in the bear enclosure had been installed whereas renovation in other sections was under way.

The Earth Conservation Reports, a nonprofit organisation, posted to Twitter and Facebook early on Tuesday that their team was concerned about the bears after which they visited Jallo Park and saw that the state of affairs was appalling. Bears lived without any shade, and the green awning fixed earlier was not gone.

“There is no sign of water or food. There is no chance even in the near future of them getting a new enclosure. Jallo Park Assistant Director Ghulam Rasool never bothers to come out of his air-conditioned room to see what is going on with these bears. The bears are not even given a shower anymore,” reads the Facebook post.

The post, pictures and videos went viral among citizens concerned, and environmental and wildlife experts and organisations, adding to the pressure on the government.

Sohail Ashraf, the Jallo Park director, said he had personally checked that the bears were “healthy and fine”.

“They would not have been able to survive long hours in the blazing heat,” he said. “Everyone can come and see that they are not in danger.”

He added that bears often dug into the moats, which made them look unwashed and muddy. “Yes, there should be more access to water and there are a few technical faults with the moat as well. It is true that the bear enclosures are not in a good shape, but we have been working on a new one.”

He is referring to the Rs400 million project of the Punjab government, which, he claims, is 80 per cent complete; it has been going on for two years. However, a suspension of funds by the government means the rest of the work will take time.

Hasan Sukhera, the Lahore Zoo director, who was also part of the remedial measures being taken for the bears on Tuesday, said this problem of the suspended work was communicated in a meeting with the chief secretary on Tuesday. For the time being, they have built a shade for the bears, while they were also planning to construct a pond as well as a shower system. “Our exhibits have met standards although improvements are also being made. But funding is our main problem,” he claimed.

He said they had managed to build the shade for bears in one day and will be working on the pond in the coming days. He admitted that a bigger enclosure was definitely needed.

“Ideally, the bears should be shifted to a sanctuary, but there is 50pc mortality rate in shifting them, and right now we cannot risk that. The public does not know this, but the bears have also been using an underground trench.”

He added that Black Bears lived in dens even in their natural habitat to escape extreme cold or heat. On the other hand, he said, the shade may even be dangerous as the bears who were expert climbers could escape from there. “We will now have to see that the walls are greased every day,” he said. “The Lahore zoo and safari are in a much better condition than any other place. The zoo moats for tiger, bear, lion, and chimpanzees were upgraded in 2005 with foreign help.”

The Jallo director, Ashraf, also agreed with the zoo director that these bears must be shifted to sanctuaries, but the temperatures were too high to take that risk.