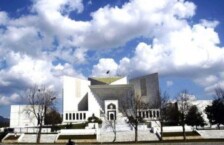 ISLAMABAD: The country’s top court has sought a reply from the Punjab government on the violation of a six-year-old judgment regarding the protection of the environment in Murree tehsil.

A three-member bench — headed by Chief Justice of Pakistan Anwar Zaheer Jamali — on Wednesday took up the plea of residents of Murree, seeking directions to the provincial government authorities on account of violations of a July 31, 2007 judgment, wherein the court had ordered an end to the Rs60 billion New Murree City Project, which was termed a manmade disaster for the entire Murree forest range.

The judgment was given in a suo motu case initiated by former CJP Iftikhar Mohammad Chaudhry on a newspaper report.

The newspaper report had criticised the project for having the potential to cause adverse environmental effects, including threats to the Murree Hill forests, and pollution of the water in the Simly and Rawal dam reservoirs.

The judgment held that Murree, Kahuta, and Kotli Sattian tehsils have been declared environmentally sensitive areas under the Pakistan Environmental Protection Act 1997 and all construction and development activities are banned in these areas.

The SC had also banned all development activities along either side of the Murree Expressway, while directing the district administrations to implement the orders.

The applicants through senior lawyer Sardar Muhammad Aslam told the bench that in spite of undertakings by the Punjab Environment secretary, development activities still continue.

The applicants further contend that a firm called Commoner Development has acquired 750 kanals in the revenue estate of Manga Tehsil and the company has also started development activities such as land leveling, felling trees, and forcible possession of reserved land.

“The developers, being highly influential persons, have managed to register false cases against the activists to [silence them] so that developers may succeed in construction of their proposed projects”, the petition reads.

The application also contends that construction work in Murree tehsil is going on in violation of environmental laws without any hindrance.

The applicant says that it is in the interest of all citizens visiting or living in Murree, while contending that the construction work presents a substantial threat to the hills and to water flow, which is resulting in disease outbreaks and devastation of natural beauty.

After considering the plea, the bench gave one week for the Punjab Environment secretary, Environment director general, Rawalpindi Division commissioner, and the Commoners Development CEO to file replies.